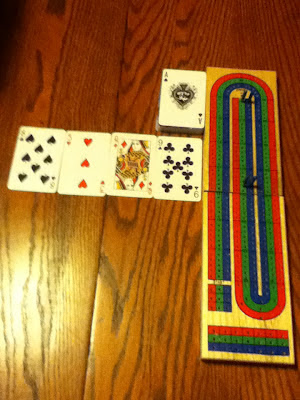 In the game of cribbage, nineteen points is an impossible score.  When a player gets a worthless hand with zero points, the running joke among experts and novices alike is that they pegged nineteen points.  So when Raymond Dehn led Terra Cole by nineteen votes after a series of last-minute dirty campaign tricks, the card player in me immediately compared his margin to that point total in cribbage.

I have been so disgusted by what I have seen over the past week that I have gone so far as to call the victory "illegitimate."  That word was chosen carefully, as there is no way that I could more strongly articulate my distaste for the final days of the campaign in 59B.  But if all I wanted to do was complain about who won, or hurl insults across the political aisle, then frankly it would be best for me and others like me to be silent.  There will come a time--soon--where it will be appropriate for everyone to set aside differences and accept whatever the results of this election are.  That time has not yet arrived.

Before we get there, I believe several things need to happen.  First off...

...We should have a recount.  The 19-vote margin of victory amounts to a 0.8% win for Dehn, and the threshold for an automatic recount is 0.5%.  Even so, this is too close and too important to allow such a small margin to go unverified.  If the will of the community--however that will was determined and however closely divided it was--is that Mr. Dehn be our next Representative, we need to be absolutely sure.

Second, Minneapolis Democrats for Truth should be fully investigated and audited.  Mr. Stinson, their treasurer, claims that they have not violated any campaign finance disclosure rules or laws.  I do not find that claim to be credible.  That organization came into existence on August 7, 2012.  Within days, people in 59B received two mailings that were professionally done and on very high-quality cardstock.  Also within that time frame, voters received live phone calls--not robocalls, but live ones--that furthered the gutterball tactics of the postcards.

These actions had to have significant financial costs (or value if they were donated).  Yet there are no reports of Minneapolis Democrats for Truth showing donations of $1,000 or more as required by law.  It is possible that they received a series of smaller donations.  But given the quick turnaround time from inception to action that appears to be highly coordinated and rather expensive, I do not find that possibility to be plausible.  Mr. Stinson and Ms. Moore are free to comment here or contact me and I will continue to publish their claims.  I do not expect to be swayed from my position without direct evidence to the contrary.

Additionally, there were repeated claims from both Cole and Alexander supporters that Keith Ellison's campaign volunteers were telling or at least heavily implying that Dehn was endorsed by the DFL.  By all means, Keith should endorse the candidate he thinks is best qualified, and should encourage his campaign to heartily support that candidate out on the doors and on the phones.  The first time I heard of confusion over whether Dehn was DFL-endorsed, I attributed it to the difficulty of quickly delivering a bulky doorknocking pitch.  It can't be easy to clearly distinguish between Ellison-endorsed and DFL-endorsed, and maybe it was hard for inexperienced volunteers to switch gears.

When those claims continued over time and throughout the district, it became harder to believe that the actions were unintentional.  Everyone who received such a questionable phone call or home visit should report what happened so that we have a clear picture of how the campaign was conducted.

Finally, Dehn himself has repudiated the low tricks employed at the penultimate hour.  I suppose that's better than flaunting unethical behavior, but such a repudiation is to be expected in cases like this.  I have spoken with several people who have deep experience with political campaign work.  I asked each of them the following question:  Given the small size of the election in 59B, how plausible is it that neither Raymond Dehn nor his campaign was aware of or coordinated with the actions of Minneapolis Democrats for Truth?

Each person with experienced campaign work responded that it was not plausible at all.

For the sake of setting aside any differences and moving forward, I'd like to believe there was no coordination between these two.  I'd like to be able to say this election was won, if not cleanly then at least fair and square.  But until there is a recount and a full accounting of Minneapolis Democrats for Truth, those nineteen votes won't be worth a whole lot.
Posted by Jeff Skrenes at 10:24 PM