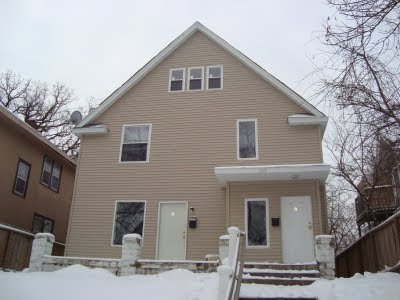 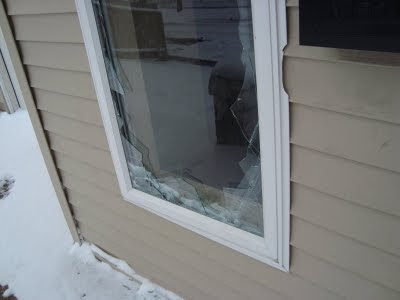 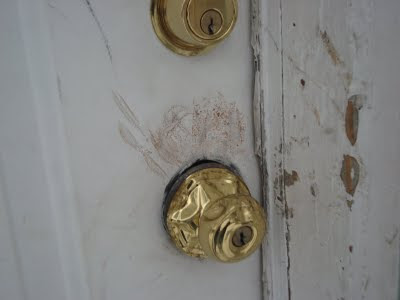 Post and photos by the Hawthorne Hawkman.  Editorial note:  the photos were taken almost a year ago and it is unknown if the property is in identical, better, or worse condition at this time.

Julia Rozhansky and Zack Dyab, two of the principals in the Danna D III corporation and American Choice Lending, pleaded guilty to mortgage fraud in federal court this week.  Danna D was a series of LLC's (roman numerals I - VI were also used for properties at various locations, although most NoMi houses were under the III entity), and Rozhansky and Dyab had planned to buy "hundreds of rental properties in north Minneapolis," according to an MPR report that broke the story of their criminal activities.  Through wire fraud and mortgage fraud, they stiffed investors of over $2.5 million and caused more than two dozen foreclosures in north Minneapolis alone.

This is a pattern we've unfortunately seen all too often; predatory investors coming in and buying properties on the cheap, using fraudulent means to qualify, not pulling proper permits, doing substandard (if any) maintenance, and ultimately losing scores of homes to foreclosure when the house of cards collapses under its own weight of malfeasance.  At least we're seeing some of these crooks finally get jail time, but the impact on our community will likely outlast their prison terms.

And when fraud is committed at one of these properties, it's not just a one-time occurrence.  The neglect of a property often makes it unappealing to anyone but the next predatory investor.  Or the first fraudster wants to sell at an over-inflated price, and the only ones qualifying for something at that level are the ones committing the next round of slumlording mortgage fraud.  That is exactly what happened with one of the properties listed in the indictment (the plea agreement isn't available online yet, but I will publish it once it is, and the sentencing hasn't been scheduled).

1417 Logan Avenue North was owned first by Danna D III, and then...

...by Paul Koenig, of Pamiko fame.  This was one of the three multi-million-dollar foreclosures Koenig was hit with, and is now owned by Minnwest Bank.  Danna D III got most of their financing through Highland Bank in St. Paul, and by all reports, Highland was fairly cooperative with the city of Minneapolis in trying to clean up this mess.

(Pamiko tangent ahead)  Minnwest has been somewhat more problematic.  They understandably want to sell their foreclosed properties for as much money as possible, to minimize their losses.  So they're pricing the homes based on their income-producing potential.  The city of Minneapolis is rightly saying that these homes are simply not worth $120-150,000, and instead should go for $30-40,000.  The whole reason the houses can produce the income to possibly support the higher mortgage payment is because many of them have had their front porches closed off and floor plans rearranged to add another bedroom or two.  Who wants an overpriced, unappealing house that has several extra bedrooms shoehorned in?  Your next round of predatory investors and slumlords, that's who.

(Back to Danna D III and Dyab/Rozhansky)  Here are the NoMi properties listed in the federal indictment, and a summary of what these two criminals did with them:

Dyab sold this house to a straw buyer for $305,000 (its current tax-assessed value is $99,000) in a transaction funded by Great Northern Financial Group.  Then one of his own companies, Rames Enterprises, repurchased the loan from GNFG on the grounds that the transaction was "permeated by fraud."  Rozhansky then acted in her capacity as an employee of American Choice Lending, sending loan application documents to Argent Mortgage Company.

Those documents, also for a straw buyer, falsely stated that the applicant had an annual income of over $210,000 ($180k from a dry-cleaning business and $30k from rental properties).  The application also fraudulently failed to disclose that Rames Enterprises owned both the property and the existing fraudulent mortgage, and it also did not appropriately disclose the close relationship between Dyab, Rozhansky, and the straw buyer, a close relative.

Dyab gave the buyer almost $34,000 of his own funds so the transaction could close, and Progressive Title (ANOTHER company owned by Dyab) oversaw the fraudulent transaction, to the tune of $330,000.

Rozhansky set up a fraudulent deal through ACL with a close relative as a straw buyer.  That loan misrepresented the applicant's income at over $300,000 per year and failed to disclose the relationship between Rozhansky and the buyer.  Dyab provided the buyer with a$15,000 check from Progressive Title to be used as the down payment.  He then pocketed over $48,000 from the proceeds of the sale.  Then they found another schmuck to buy the house at over $200,000.  It's now vacant and owned by the city of Minneapolis.

The defendants fraudulently induced Argent Mortgage to loan $252,000 on the property.  Dyab pocketed the $66,000 in proceeds that were supposed to go to the seller.  He then got another buyer to purchase this house with a third co-conspirator.  The proceeds used for that transaction were from other fraudulent deals on which those two conspirators later defaulted as well.  And then this house was later picked up by Koenig/Pamiko.  It is now owned by Minnwest Bank.

Once again, Rozhansky prepped fraudulent mortgage documents for a straw buyer who was a close relative, grossly overstating the income of the applicant and failing to disclose the numerous other mortgage obligations.  They also falsified a verification of deposit that showed the borrower had over $171,000 in his checking account.

Dyab gave the buyer a $27,600 check that he passed off as his own funds, allowing the $225,000 loan to close.  Dyab then pocketed the $57,000 that was to have gone to the seller.  The same two defaulting borrowers listed in the Logan Avenue property then purchased this one.  It is now owned by New Choices II/Triumphant Properties LLC.  Those entities have also engaged in some very questionable activities.

The same strategies were used again, but this time they also fabricated a letter from the buyer stating how much money he made from a (you guessed it) dry-cleaning business.  Lots of good, fake money in the pretend dry-cleaning industry, I guess.  They also falsely claimed that the straw buyer would use the place as a primary residence.  Dyab pocketed $52,000 that should have gone to the seller.

At 1508 Oliver Ave N, the same strategy was used, this time with the added bonus of identity theft.

Finally, at 1426 Oliver Ave N, income was falsified, a verification of deposit was forged, and Dyab tricked the title company into believing that he held a $139,000 second mortgage on the property, thereby obtaining the seller's proceeds.

Whatever sentence these two are given, I guarantee it won't be long enough.  Let's hope for the maximum.
Posted by Jeff Skrenes at 9:14 PM