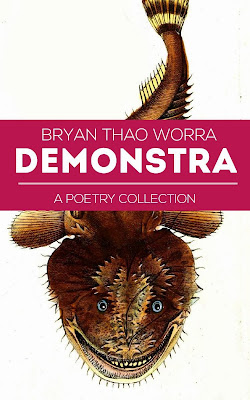 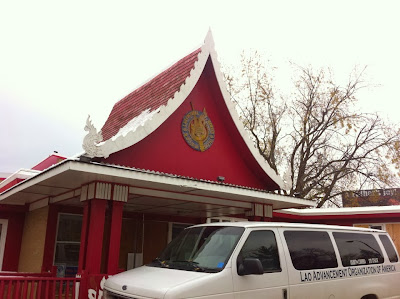 The end of the year is almost here and Bryan Thao Worra is back in town!  And while that's reason enough to celebrate, the launch party for his new book is coming to north Minneapolis tomorrow night.  The collection of Speculative Poetry, DEMONSTRA will be released on Monday, December 30th at the Lao Cultural Center at  2648 West Broadway Avenue in Minneapolis from 4:30 to 6:30 PM.  He'll be sharing the spotlight with debut children's book author Nor Sanavongsay and Saymoukda Vongsay of "Kung Fu Zombies vs. Cannibals" fame.

It's free and open to the public and a great chance to see what the inside of the Lao Advancement Organization looks like.  And it will be a rare opportunity to celebrate a book release on the northside.

Like his previous collections BARROW and On the Other Side of the Eye, his new book is heavily influenced by his experiences in Minnesota, particularly North Minneapolis. Obviously I'm partial to "Iku Turso Came to NoMi," which combines Thao Worra's unique perspective with some Finnish sea monster mythos and bits and pieces of Hawthorne Hawkman trivia.

But you'll also catch poems that give nods to many of Minnesota's popular science fiction, fantasy and horror writers such as Catherine Lundoff, David J. Schwartz, and the Lady Poetesses from Hell. DEMONSTRA also includes great illustrations by Vongduane Manivong including all-new takes on legendary Lao monsters.  I've been privy to some of those illustrations, through the book's Kickstarter campaign, and they are quite impressive.

He's thrown in entities such as the Hodag, Cthulhu, and cannibal grandmother, and another highlight is the Lao weretigers roaming a fabled Laotown of the future. (Hodags, and Weretigers, and Cthulhu, oh my!)  Bryan's Laotown is a bustling corner of North Minneapolis where the Lao set up the world's largest fermented fish factory to make their notoriously stinky padaek, only to get taken over by a benevolent Artificial Intelligence prone to playing elevator jazz. It could happen.

Lao American author Nor Sanavongsay is debuting his very first children's book from Sahtu Press, "A Sticky Mess." He has created a beautifully illustrated adaptation of a traditional Lao legend that has been popular for almost six centuries involving a trickster. Nor Sanavongsay last presented a preview of this book in 2010 during the National Lao American Writer's Summit at the Loft Literary Center, and now, 3 years later, here it is.

Copies of DEMONSTRA will be on sale for $10 and there will be additional entertainment and refreshment. Catch it if you can!
Posted by Jeff Skrenes at 8:08 PM 1 comment: 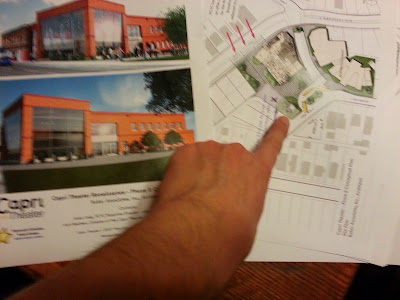 *Disclaimer* Some of the events described below occurred at a Jordan Area Community Council housing committee meeting.  I was recently elected as Board Chair for the organization, and my comments are my own opinions, and not the position of JACC unless expressly stated as such.

At a recent community meeting, the Capri Theater presented its proposal for an expansion of their current building.  Overall, these changes are excellent, and especially as someone who lives around the corner I cannot wait for them to happen.  In fact, a main issue with the upgrades is that the fundraising needed will likely mean that we're at least a year or even two or more away from breaking ground.

Even though the Capri has already won accolades for its jazz venue, changes like adding dressing rooms and more performance and gathering spaces will greatly enhance this community asset.  But there's one thing that has me concerned, and that's...

Hong Kong International Building Sold to Kemps, Rumored to Be Slated for Demolition and a Parking Lot 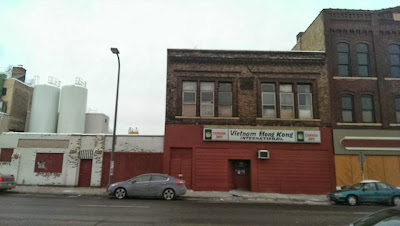 The storefront and office or living space at 404 West Broadway, the Vietnam Hong Kong International building, has been in limbo and a source of speculation in north Minneapolis.  Today on a thread in the Old North Minneapolis Facebook group, some answers came forward, and they do not bode well for the building.

Reportedly the property has been acquired by Kemps, and that part can be verified as the Minneapolis property information website lists Kemps as the owner.  The speculation that follows, however, is not yet confirmed.  But there seems to be only one potential use that Kemps would have for the parcel...