Queen Avenue Bike Path Presents Its Own Set of Problems 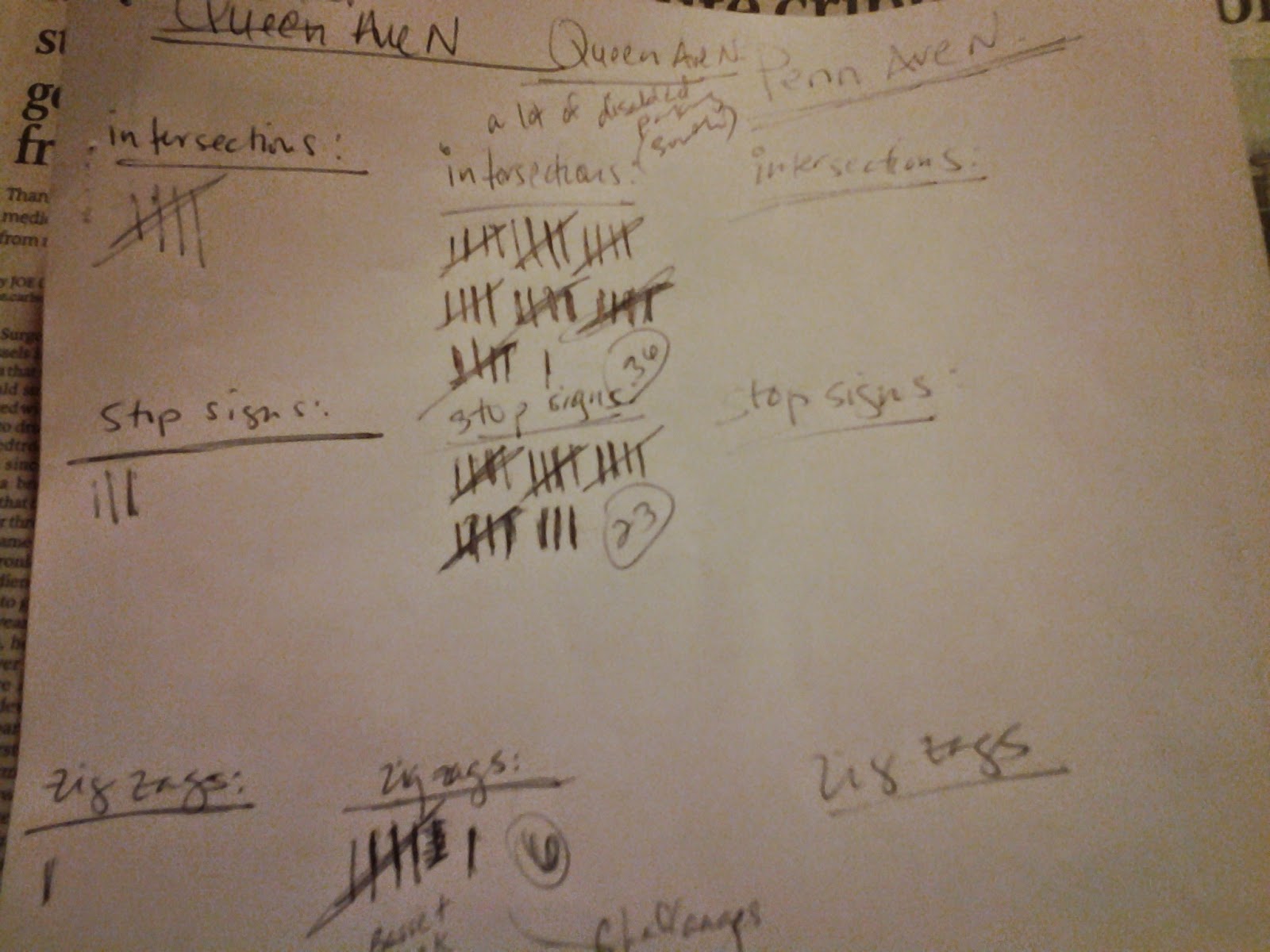 Today a fellow northside biker and I traversed the most likely alternative to a Penn Avenue bike lane, as we went from Highway 394 all the way up to 44th Avenue North.  We have both been regular attendees at the Penn Avenue Community Works meetings, but this was our first time actually going along the route.  While Penn presents its own set of challenges for bike lanes, Queen is far from an ideal alternative.

In fact, after this experience (in a car, so that we could more easily and quickly make an account of the corridor and because it's February) I would push back to our policymakers and elected officials.  Either we're serious about getting a north/south bike corridor somewhere between the proposed Humboldt/Irving Greenway and Theo Wirth, or we're not.  If the political will and funding aren't there to do it right (even on Queen, which in my book doesn't meet the criteria) then tell us now and stop wasting everyone's time.

If we ARE serious about biking amenities on the corridor, then the first question is... 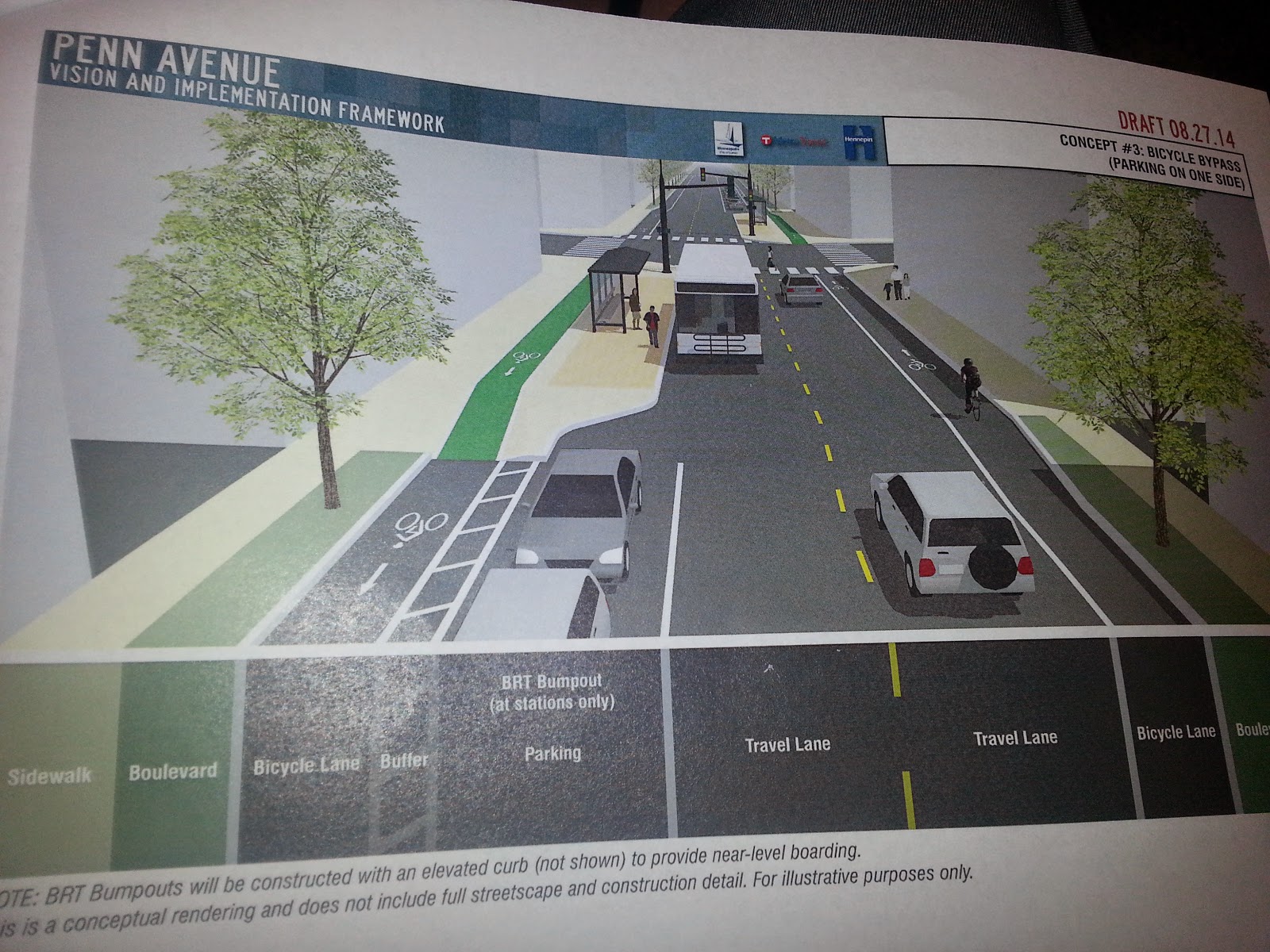 Disclaimer:  I serve on the Penn Avenue Community Works committee as a delegate on behalf of the Jordan neighborhood.  The only formal position JACC has taken on the Penn Bus Rapid Transit is that there be an additional stop in Jordan besides the Broadway and Lowry stations.  If JACC takes additional positions, I will work to implement them as long as I am on the committee as a Jordan delegate.

The Penn Avenue Bus Rapid Transit project, also known as the C Line, had recently picked up quite a bit of momentum.  In late 2014, we were informed that the BRT line in St. Paul (B Line) was not moving forward as quickly as anticipated.  That potentially freed up funding to allow detailed design to begin in 2015 with construction on the C Line in 2016.  At recent Penn Avenue meetings, we were operating under the hope that this funding and construction schedule would take place.

But there is an entity called the Transportation Advisory Board that makes programming decisions for these funds, and at their January 21st meeting they decided...

The Case of the Sign Spam Assault Comes to a Close 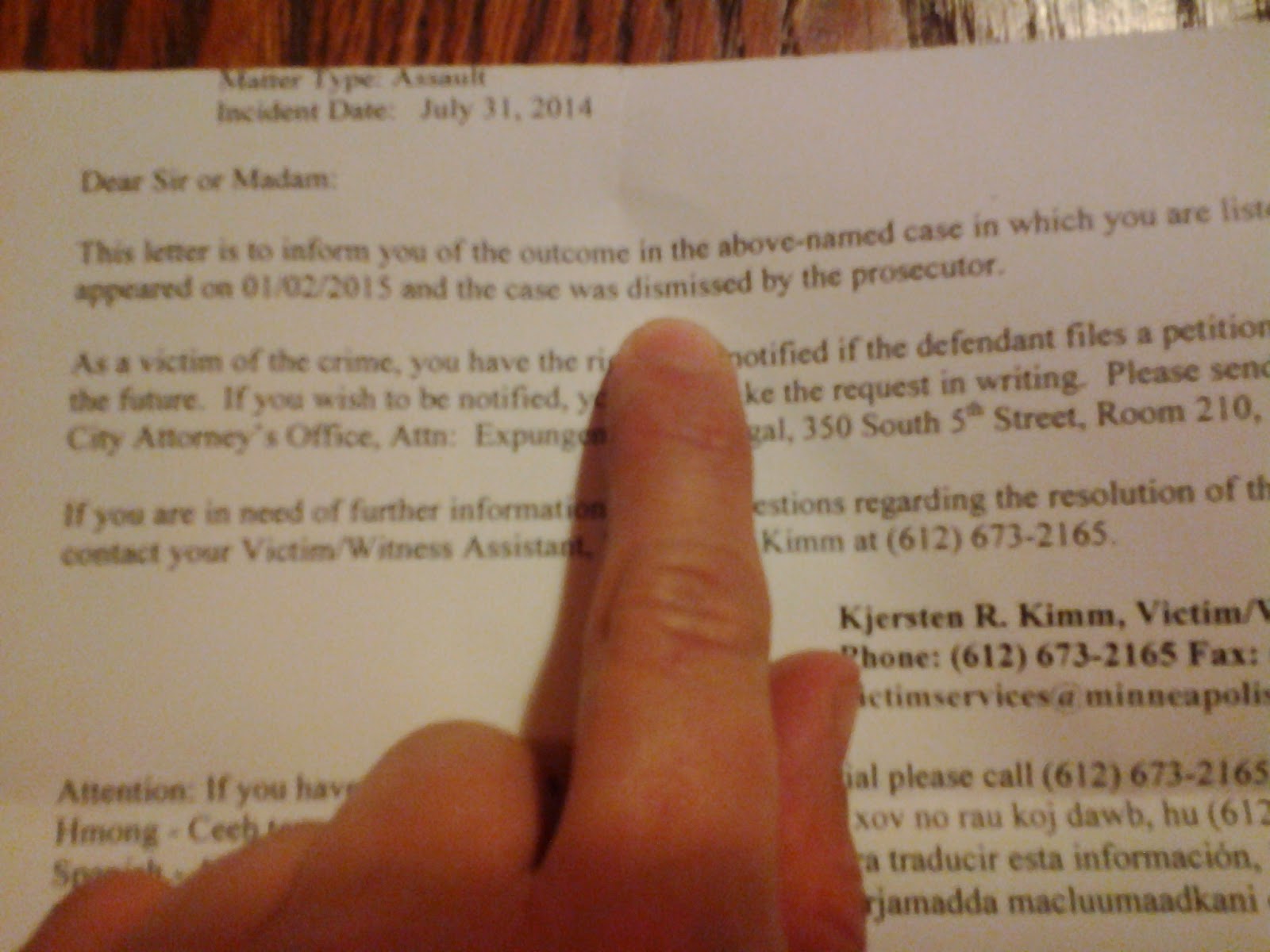 Last summer, I was assaulted as I was taking down sign spam in front of my house.  After the initial blog post, I held off on writing about the progress of the incident, wanting to see how it would play out.  The case has now come to a close, and my charges were dismissed.  That's not entirely a bad thing, as will be shown later.  But first, a brief recap:

I was sitting on my front porch, watching the world go by one summer evening when I saw a van pull up and plaster the light poles with sign spam for upcoming concerts at a downtown venue.  It dawned on me then that I hadn't taken down that stuff for a while, and my whole corner was looking kind of ugly.  So I went out and ripped off that sign and others that were taped to the four posts on my corner.

Well, the perpetrator didn't like that, confronted me, threatened to both assault and rob me, and then actually did throw a punch.  He then hopped into his getaway vehicle--the 19 bus line.  I got on after him, and informed the bus driver that I had called 911, then removed myself from the situation.  He was caught a few moments later and brought back to my house, where the helpful MPD officers walked me through my first citizen's arrest.

Read more »
Posted by Jeff Skrenes at 7:30 PM No comments: