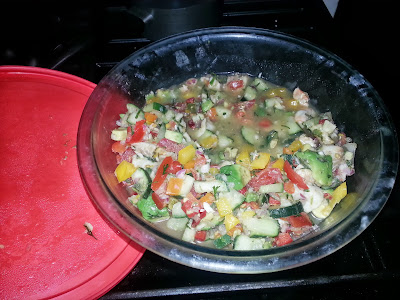 You can buy shrimp at the West Broadway Farmers Market, although you might not want to do so right before a storm takes out power for two days.

That was precisely the dilemma I was faced with last weekend.  I had this great shrimp, but no way to cook it and no place to keep it fresh.  Sure, I could have used a lighter to heat up my gas-powered stove top.  Or I could have brought the shellfish to a friend's house for temporary safekeeping.  Instead, I decided to make an adventure out of this situation and also a test of faith to see if God Wanted Me To Contract Salmonella.  (He didn't, apparently.)

Ceviche, for the uninitiated, is a way to cook seafood without actually cooking it.  The acidity from citrus juices acts as a cooking agent for the meat and makes it safely edible.  As an added bonus, it is carbohydrate free, lactose free, gluten free (I think; I'm not really sure what gluten is), it doesn't contain red meat or pork, it's not cooked, and it can be made without shellfish if one so desires.  It's basically a dish that can be prepared in a way that meets the standards of almost any dietary fad and offends no one.  Except vegans.  And Ted Nugent.  Anything that ticks off both has got to be delicious, right?

So I prepared the ceviche and then stored some in my freezer and a little bit in the fridge to keep me tided over during the blackout.  Everything in this recipe was found either at the West Broadway Farmers Market, the Broadway Cub, or my own backyard garden.  The herbs from my garden are not traditional ceviche seasonings, but they were what I had available.  And just because you might want to copy my recipe, don't think you can come by and take the herbs from my house.  You'll have to buy them from the market's aggregate table.

To make "Blackout Ceviche," you take...

Everyone Should Go See "Clybourne Park" 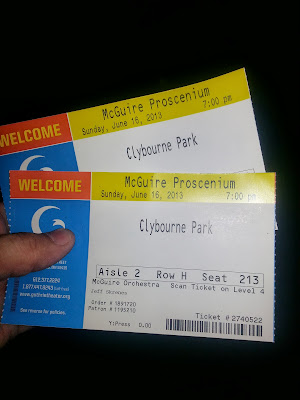 I don't know how to start my critique of the play "Clybourne Park," but I want to make sure to point out that it tricks you into talking about race--and that's a good thing.  I've had a bit of a case of writer's block about this review, so I borrowed a tip from a high school English teacher of mine.  "When you can't think of how to start," she would say, "just write down 'I don't know how to start, but what I really want to say is...' and then write from there.  Then go back and delete the first phrase, and you have your story."  In a manner of speaking, "Clybourne Park" does just that.

The play, currently being performed at the Guthrie, tells the story of a neighborhood, through the point of view of a house, and spans multiple generations.  It opens with a White family in the middle of last century, packing up and preparing for a move.  Their African-American maid is, in many ways, the glue that has held this couple together through a deep personal tragedy, although she is often treated as if she would be incapable of performing the simplest tasks without being reminded by the wife to do things right.

Other friends and neighbors, and even a local pastor who acts as a confidante, are shocked to find that...

The DFL Convention as a Political Event Horizon 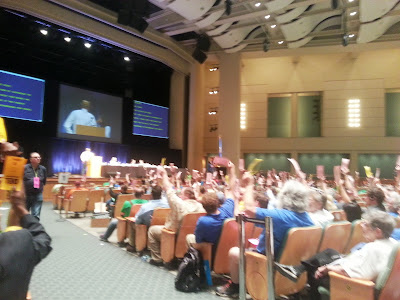 I went into Saturday's Minneapolis DFL convention as a strong Schiff supporter, and we all know how that turned out by now.  So what follows is not neutral, although I'll do my best to be even-handed.

There is a physical phenomenon called an "event horizon," in which an object cannot be affected by an outside observer.  The object is being pulled by a gravitational force from which escape is impossible.  From an observer's standpoint, the object appears to slow down and not move at all, while the object itself experiences events in real time.  Event horizons are most commonly observed at the point of no return of a black hole, but can also be experienced by attending a citywide DFL convention.

The "event horizon" for me was when one minute turned into forty-five, which astute observers already know happened when...

Who Authorized the Fire Department's Destruction of 3738 Dupont Ave N?

When the city of Minneapolis does really stupid things, like tear down 3738 Dupont Avenue North, they open themselves up to even more foolish allegations.  After the demolition of yet another property over north that a) didn't need to come down, and b) had a willing seller and buyer, North Talk and the Minneapolis Issues Forum are full of allegations of plans to displace, or that there is some "big demo" group behind house destruction and if we only follow the money we'll find the real culprit.  So in the same spirit, I will make my own assumption that may turn out to be foolish:

The owner of 3738 Dupont Ave N did not give permission for the Minneapolis Fire Department to conduct training at his property.

That prospect is one of the many things that bothers me about this house going down, but other preservation angles are already articulated elsewhere.  If I am incorrect in my assertion, the rest of this post can be dismissed.  If I'm not, then either the city has statutory authority to conduct non-emergency and non-administrative entry to vacant properties, or someone downtown authorized and coordinated the MFD training with zero respect for private property.

Why is this a problem?