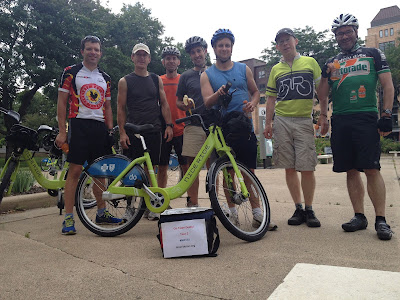 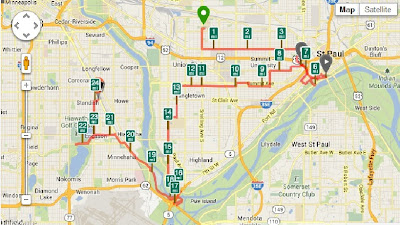 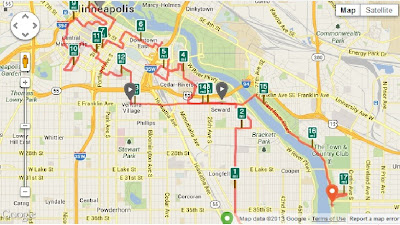 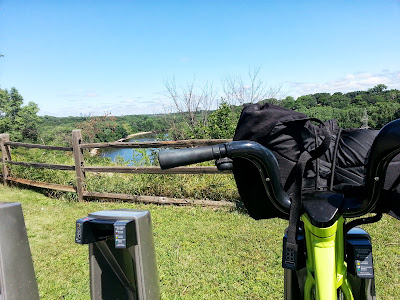 Ed Kohler of The Deets started a tradition several years ago by using Nice Ride bikes to hit every single kiosk in a single day.  I wish I would have joined him for the first year, when there were only sixty-five stations that could be traversed in about three hours.  In 2013, there are 170 stations spread out over 110 miles of biking--all of which, under the rules of the challenge, must be traveled using the 50-pound Nice Rides.  Furthermore, a lot of the new stations are tucked away in obscure places that probably no one goes to.  Like behind random buildings, or in St. Paul.

So just to see if I could do it--and in the hopes that I could find my middle-school gym teacher on Facebook and tell him I finally earned that "participation" ribbon at the 7th grade track meet, damnit--I decided to give this a shot.  It didn't go as well as I'd wished.

I started my day by remembering what the Kellogg's cereal jingle of my youth taught me about being my best and eating a good breakfast.  Eggs, hash browns, a bagel, fruit, juice, and coffee took a bit longer than anticipated, and I missed the start of the event by a few minutes.  While playing catch-up to the rest of the crew, I ran into some technical difficulties... 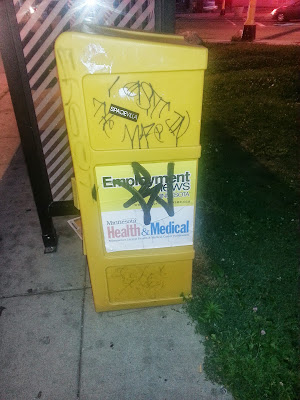 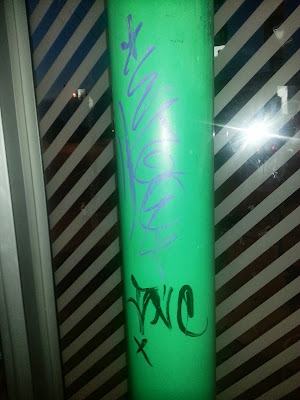 Here's a fun activity and all you need is an old political campaign t-shirt plus a can of graffiti remover.  (Sorry, Melvin Carter.  Doorknocking on your first campaign was great, but I don't live in St. Paul and you're not even on the city council anymore.  If it's any comfort, your campaign gear is being put to good use.)

I make the occasional forays around my home to keep my corner graffiti-free.  But with Flow coming up this weekend, a stage at Penn and Broadway, and a recent shooting nearby, I ventured farther south.

The bus stop at the northwest corner had its fair share, most of which I could remove.  Paint seems to come right off, but anything with markers seems to stick around in spite of my best efforts.  A few other garbage cans along the corridor had markings that came off with varying degrees of success.  But where things were really rough was the artistic bus stop in front of the NAZ/Five Points Building.  Every pole inside the shelter was covered top to bottom in either gang markings or the smitten professions of adolescent couples.

As an aside, if the Five Points Building had its originally intended use of a sit-down restaurant with perhaps an outdoor patio area, the foot traffic alone would be enough to deter spray painters.  As it stands now, quite a few people have commented to me that they thought the first floor was still vacant because the shades are drawn and nobody is seen coming or going.

I had to dub this "quasi-vigilante" because there were a few items that my shirt, elbow grease, and chemicals couldn't remove.  While those likely won't be gone before Flow, at least they've been reported as I dusted off the Minneapolis 311 app.

By the way, here's the map for the weekend, in case anyone else feels like chipping in on graffiti abatement at key intersections. 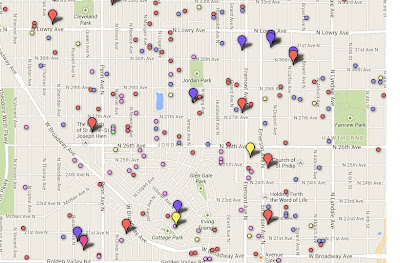 Image from a Google maps compilation of vacant properties, put together by Chad Davis.

When it comes to the housing recovery in north Minneapolis, there's a tool in our collective toolbox that we haven't been using.  In impacted areas, or at the city's request, Hennepin County can accelerate the tax forfeiture process so that vacant properties can go into forfeiture after as little as one year of delinquent taxes.  I found out about that opportunity just before I left my job at Hawthorne.  I can't help but wonder how much farther along my old neighborhood would be if I had known about this process and utilized it from the start.

Thankfully, I don't have to just wonder.  By comparing the current boarded/vacant list and the properties for sale on the MLS in Hawthorne, we can get a pretty good idea. 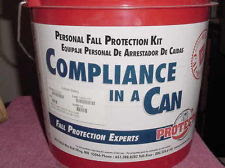 Not too long ago, the city looked into acquisition of a property in the Jordan neighborhood.  The likely intent would be for demolition, so I went over to take a look.  The house was listed for sale on the MLS, so we were able to get inside and look around.  The house had suffered severe water damage throughout, and the smell of mold was overpowering.  Mold, even pervasive mold, is not necessarily grounds for tearing a house down.  But could the water damage be so extensive that it affected the structural integrity of the house?  We couldn't ascertain that in one visit.

The housing committee in Jordan recommended acquisition by the city for demolition, but only if an approved contractor deemed it unsalvageable.  Before we could take that step, the house went into multiple offers, and the city likely lost out on its bid.

The dilemma we faced was a common one for distressed properties that could go either way.  Namely, if it's NOT torn down, then who will wind up buying the house?  Will it be a known slumlord, or the next generation of problematic owners?  Or is there a chance that a good owner might come along?  The property is viewed in the community as beyond repair, not because of structural deficiencies, but because the community sees it as highly unlikely that a good owner will come along.

In this case, as well as many others, that dichotomy should not even rear its ugly head.  This house was condemned, and therefore before it is occupied--even by an owner-occupant--it has to go through... 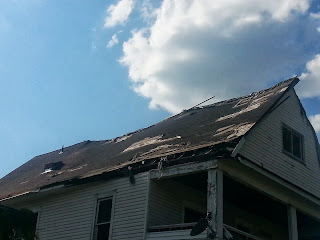 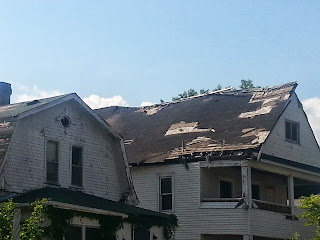 If Mahmood Khan put as much effort into screening tenants, or fixing his properties, as he does into paying his attorneys to fight the city of Minneapolis, the northside would be a better place.  Instead, demolitions that are all but inevitable get tied up in court for years on end, and in the meantime Very Bad Things continue to happen at Khan properties throughout our community.

As a die-hard preservationist, one part of my credo is to never hold the owner against a property when determining whether a structure is worthy of rehab and continued use.  Khan tests that ethic more than anyone else.  I hear through the grapevine that some of the features inside 2639 Oliver are quite nice--amazing, even.  But as long as Mahmood Khan owns the house, none of that will matter.  If he really was serious about preservation and rehab, he would have entered into a restoration agreement with the city long ago.  Although he doesn't do such a great job of keeping those either.

In any case, a judge reversed the demolition order on this property, and all I can say is thank God the court opinion is "unpublished" and can't be used as a precedent.  Although just as surely as we know this won't be the last of his houses with a demo order, we know damn well Khan will now try this trick again.  The ruling, although wrongheaded, does have some interesting points.  For instance, it states...