When the Green Homes North proposal to build one hundred new homes in north Minneapolis over the next five years was first rolled out, I was ecstatic.  The influx of new housing units could have the potential to spur much-needed development and revitalization.  And when it came time to submit public comments, I made my top priority very clear:  Not a single "green home" eligible property should come from a demolition.  With hundreds of vacant lots in our community already, I adamantly opposed creating incentives for even more demolitions.  Furthermore, when accounting for embodied energy, the greenest house is most often the one that is already built.  If this were to truly be a "green" project, then preservation would be a priority.

Or so I thought.

The Jordan neighborhood alone has over fifty properties eligible for the Green Homes North program.  Six currently have structures on them, and a seventh was demolished recently enough that the dirt hasn't been covered in snow.  One property, 3015 Morgan Avenue North, is pictured above, and by outward appearances would be a viable rehab candidate.

The house that was torn down was at...
...2719 Irving Avenue North.  Here is a Google Street View image of what was once there. 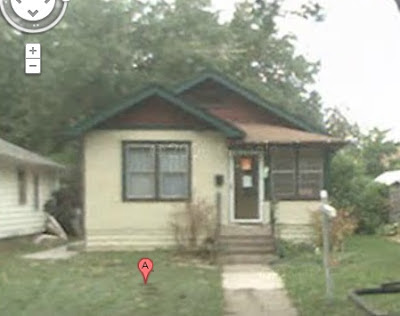 Perhaps the most famous house on this list is at 2637 Emerson Avenue North.

When the city considered acquisition of that property, I gave my input that the built form was solid and that the 2600 block of Emerson wouldn't be improved by a fifth vacant lot.  Well, the city went ahead with acquisition and demolition anyway.  And then Nicole Curtis, the Rehab Addict, staged a dramatic showdown with the city of Minneapolis when a backhoe was seen parked next to the house.   She posted pictures and an entreaty for preservation on her Facebook and Twitter feeds.  That night alone, over 115 calls were logged by 311 demanding that the house be saved.  The next day, the backhoe was miraculously gone.

I'm not too fond of either 2611 James Avenue North, which seems like a garbled architectural mess, nor of 2819 Knox Avenue North, which is basically a nondescript box.  But do either of them need to be torn down?  In each case, I would advocate against demolition at least until a proposal is brought forward through the program.  Then the neighborhood and city could evaluate whether the new house is a better fit.  If I were to favor demolition prior to that, it would be on personal aesthetic grounds.  And I would rather a more objective approach be utilized. 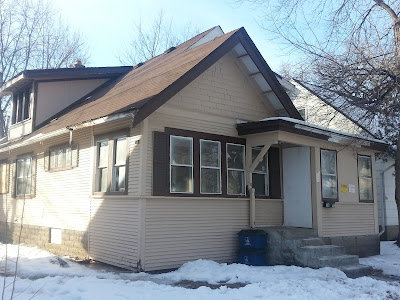 2934 Queen Avenue North, however, definitely looks like one that would be a great rehab property.  I walk my dog past this one on a fairly regular basis and know the property quite well.

The final two properties appear to be headed towards rehab already.  2046 James Avenue North has been the topic of some discussion about saving, although its survival is far from guaranteed.  2114 Irving Avenue North was slated for demolition when neighbors began to protest.  To their credit, CM Samuels and the appropriate city departments did respond well in that case.  The property is off the demolition roster and I'm told Urban Homeworks will be doing the rehab.  But the broader question remains:  How did either of these houses get slated for demolition in the first place?

Furthermore, the top sales price for a Green Homes North lot in Jordan is just over $4,000, which seems to indicate that the new developers aren't picking up the tab for the demolitions.  You and I, as taxpayers, have that privilege, as the "green" in Green Homes North apparently refers to the money we continue to spend on the unwarranted destruction of our housing stock.

ADDENDUM:  In the original post, 2637 Emerson Ave N was not included.  The post has been updated with that property.
Posted by Jeff Skrenes at 9:13 PM