What Does RCV Actually Deliver? (Part 2 of 2)

In a previous post, I took a look at what ranked-choice voting did for some of our Minneapolis elections in 2013.  I wanted to see if RCV makes an actual impact or not, and if so, whether it contributes to a better or worse campaign season and election.

Since I covered most of the races I am familiar with, the remaining contests will fall into one of four categories: no change, improved election, worse election, and "the jury's out."  It should go without saying that these observations are entirely subjective and if someone more knowledgeable than I am has information to sway my analysis, I welcome that.

We've got ten city council races to go, and we start in numerical order with...
Read more »
Posted by Jeff Skrenes at 9:24 PM 1 comment: 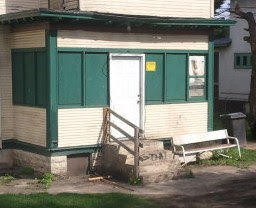 The Johnny Northside blog has been covering the sordid past of the "troublesome triplex" at 2925 Lyndale Ave N, even bringing up (with my permission) how the neighborhood asked the city to crack down on the scrapping, dumping, and overall criminal activities that have been occurring at this property for years.  But what hasn't been told is how the owner, David Epstein, was given a chance to redeem himself and begin to populate that property with good tenants.

Around the time of this photo and my blog post regarding his sign-spamming proclivities, I spoke to him and even referred a quality tenant to live there.  Here's how that went down...

What Does RCV Actually Deliver? (part 1 of 2) 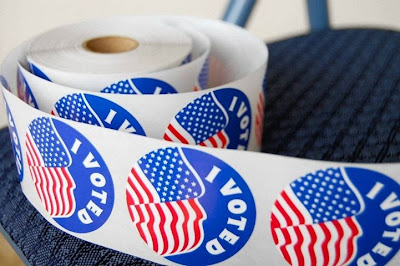 Not too long ago, the Star Tribune ran an editorial by renowned political scientist Larry Jacobs to the effect of how ranked-choice voting would disenfranchise minorities.  That article attempted to hide behind the veil of academic rigor while admitting a lack of sufficient data.  It was countered by a piece in Insight News that touched on a few benefits of the new system but mainly concentrated on hopeful platitudes.  The general consensus about RCV seems to be shaping up this way:  "Ok, 2009 clearly didn't count because the non-competitive mayoral race drove down turnout.  But 2013 is when we'll REALLY see what ranked-choice voting can do."

So I decided to take a good hard look at how this system is actually affecting the 2013 Minneapolis races.  Is it even making a difference?  If so, are the elections better or worse for it?  I've examined every single 2013 city race in the context of RCV vs. a single vote and primary system.  Full disclosure, I am not a fan of our current elections model and I won't feign neutrality.  But I will try to be fair, and some of what follows may surprise ranked-choice advocates.

Let's start with the big kahuna, the 35-person mayoral race.  In contrast to 2009, RCV has dramatically altered the landscape...

Yes We Have No Sex Offenders 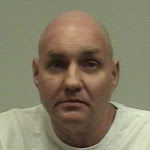 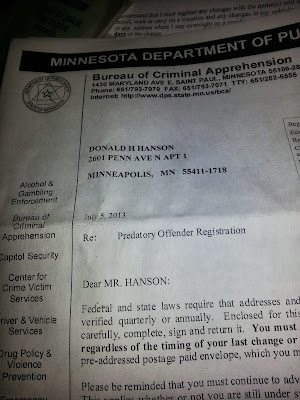 It's not uncommon for me to receive mail at my home that doesn't belong to anyone at my address.  I get the occasional thank-you note meant for someone at the Best Buy headquarters at 7601 Penn Avenue South, and most commonly, legal notices intended for a place at 2601 Penn on the southside.  I do try to get these to their rightful owner.  But when I was the recipient of a letter from the Minnesota Bureau of Criminal Apprehension, I opened the mail immediately and without checking to see who it was really for.

It turns out that a certain Donald Harold Hanson has told someone that he lives at "Apt 1" of 2601 Penn Avenue North, which is odd because I don't remember ever having someone of that name live in my home.  I don't seem to remember having apartments either, though, so who's keeping track?

Imagine my surprise when I found out that Donald Hanson is...

Hofstede Staff Timer, It's Been Awhile 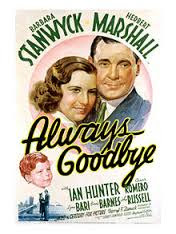 Up until yesterday, it had been 680 days since the Diane Hofstede staff timer had been updated.  But the process of entropy had almost surely continued unabated during that time.  There just HAD to be staff members who were fired or left or were temps or all of the above, who would have reset the timer if I'd known about them.  Sort of like a Schroedinger's staff member who is neither hired nor fired until I find out about him or her, at which point they instantly lose their job.  Who can really know the state of existence of a Hofstede staffer?  All we know is that the level of chaos likely stayed the same or increased.

I heard rumors, of course, but nothing from a source who would even want to give me information off the record.  So the timer remained in that state until yesterday.  That's when multiple credible sources told me three very interesting things...

Read more »
Posted by Jeff Skrenes at 6:12 AM No comments: