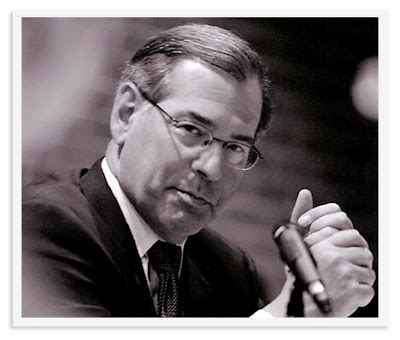 Post by the Hawthorne Hawkman, photo from the Hennepin County Attorney web page.

The last time I spoke with Hennepin County Attorney Mike Freeman, I thanked him for his aggressive pursuit of mortgage fraudsters in north Minneapolis.  Once a property is touched by fraud, it can be neglected or outright stripped of anything of value, often leading to a condition where it is appealing only to the next unscrupulous investor.  That pattern of fraud begetting fraud can cycle for years until a home is ultimately demolished.  Freeman's office posted a press release about its successful push to prosecute mortgage fraudsters in the county, many of whom operated within north Minneapolis.

I asked for a comprehensive list of these fifty prosecutions, and was given something pretty close.  Maxwell and the Gustafson clan were the biggest fish, and it should come as no surprise that the northside blogs have covered these cases more than any other media.  I'll be tracking the number and length of convictions, number of homes involved, and dollar amount of fraud after the jump.  We have seen several other high-profile cases as well, such as...
...the Universal Mortgage case, which centered around Donald Walthall, Marlon Pratt, Andrae Bellfield, Rahmeen Underwood, Cleveland Field, Thomas Scott, and Michael Allen.  The case was centered around the north side, and involved 23 homes and $4.9 million in fraud.  Walthall was the CEO of Universal; Pratt, Underwood, and Bellfield worked as loan officers; Field recruited straw buyers; Allen and Scott were brokers for the firm and Scott provided false verification documents (which was often referred to in the mortgage fraud industry as "creative writing class").

Pratt received a 110-month sentence, Walthall was put away for 74, both for racketeering.  Bellfield, Underwood, Field, and Scott pleaded guilty to theft by swindle and received two years in prison.

Our total so far:

Edward Boler and Susan Newell of US Mortgage & Realty and Picture Perfect Real Estate Group were investigated after a suspicious straw buyer case.  Boler was a mortgage broker with US Mortgage, and Newell was a loan officer next door.  Both had prior convictions on narcotics and financial crimes.  Newell was convicted of racketeering and received a 39-month sentence.  Boler pleaded guilty to racketeering, and cooperated with other financial fraud testimony.  He was sentenced to consecutive 1-year workhouse sentences and 173 months of stayed time.  He later violated probation and was sent to prison.

Newell and Boler were involved in fraud on thirteen properties, six of which were in north Minneapolis.  The fraud totaled over $2.8 million.


Larry Maxwell was one of Freeman's biggest catches.  He was convicted on theft by swindle and racketeering charges for fraud on nine homes, totaling over $2.1 million.  Six of those properties were on the northside.  Maxwell had two accomplices who were also convicted.  Jerome Kingrussell helped obtain stolen identities, and Tyron Williams was also complicit.  Maxwell received a 198-month sentence, and I have been unable to confirm Kingrussell's or Williams' sentences.  I can state from prior direct experience as a loan officer and organizer, that Maxwell's conviction represents only a small portion of the extraordinarily high volume of mortgage fraud I saw him participate in.

Leaving north Minneapolis for a while, we get to companies called 10Spring Homes and New Day Capital, led by Scott Rosenlund, Celeste Skaar, Todd Cushman, Shinon Lindberg, and Julie Busse.  10Spring was a real estate developer and construction company in Chanhassen.  Rosenlund owned it and shared office space with New Day Capital, a mortgage firm run by Skaar.  Geek tangent here:  I thought to myself, "Skaar sounds like it would be the name of a poorly contrived comic book villain."  Yep, the son of the Hulk.

So Lindberg would recruit straw buyers for properties in the southwestern suburbs, and the others assisted in various capacities.  The fraud involved over fifty properties and according to the Star Tribune, $100 million in loans.  The defendants pleaded guilty to about $6 million in fraudulent activity though, so that's the number used in the running tally.  Lindberg, Rosenlund, and 10Spring Homes Inc. were convicted after a 3-week jury trial, and the two people received prison terms of 84 months.  Skaar pleaded guilty to racketeering and was sentenced to a stay of execution of 57 months, possibly to be served in a specially designed chamber that reduces the power of gamma rays.  (citation needed)

Cushman staged down payment funds for the straw buyers and pleaded guilty to several counts of theft by swindle.  He cooperated with prosecutors in providing information, and was sentenced to a stay of imposition, community service, and a $100,000 fine.  Busse's case was settled with a stay of adjudication and a $10,000 payment to law enforcement for investigation costs.  New Day Capital was handed down a $500,000 fine.

The southwest 'burbs are a great place to visit, so let's stick around for a while and see what happened in Minnetonka with the National Investment Group.  NIG conspired with builders, a title company in Bloomington, and a mortgage broker in Plymouth to bail out builders who had outstanding loan payments connected to a large subdivision in Wright County called the Otswego Preserve.  This was the county's largest case, with over 130 properties and $6 million in loan kickbacks alone.

Brandon Flavin, Nathan Nordvik, and John Searle each pleaded guilty to racketeering and were sentenced to prison terms of 74 months, 24 months, and 65 months, respectively.  Richard Fleischmann and Burton Joseph were convicted of racketeering as well and given sentences of 24 and 18 months.  Two other defendants, Jonathan Matheson and Brian Matheson, are fugitives believed to be living in South Africa.

Over in St. Paul, we had Michael Hudalla, the CEO of Enzo Mortgage.  Hudalla managed to be both a failed motorcycle shop mogul AND a mortgage broker who wound up being banned for life from the industry.  Over the course of several years, Hudalla and Stacey Harrold worked at Enzo and ran a mortgage fraud scheme with David Schoenhoffen of LHS Mortgage.  Nicole Origas acted as a Realtor in transactions where properties were flipped to straw buyers, including Eric Bernard, who acted as one knowingly.  Bernard ran a shell construction company ("shell" meaning "fake," not that he constructed shells) similar to Larry Maxwell's Gill Construction, that facilitated distribution of stolen funds but never actually did any work.

I have been unable to find a specific tally of properties that Enzo and LHS had committed fraud on, but have verified that these were spread out over Ramsey, Washington, and Hennepin counties.  The fraud totaled over $5 million.  Everyone named above was charged with and convicted of racketeering.  Hudalla was given a 75-month sentence, Schoenhoffen, 68, Harrold, 74, Origas, 51, and Bernard, 87.

In searching Schoenhoffen's home, police also found 70 grams of marijuana, $3,400 in cash, and a handgun that is presumed unregistered.  Upon sentencing, the defendants showed little to no remorse.  Harrold even groused about how hard it was to find work in the mortgage industry, demonstrating what can only be described as willful ignorance of her own contributions to the business's downfall.  The defendants were also given fines totaling over $875,000.

In perhaps the most high-profile case, the "Beat Down Posse" of Joseph Gustafson Sr., Joseph Gustafson Jr., Troy Neuberger, and Juan Ramos ran an infamous North Side criminal organization.  They lived up to their name, assaulting numerous victims, used mortgage fraud and arson for profit, and engaged in narcotics dealing, guns, kidnapping, and other offenses.  These guys were bad news all around.

Ramos was convicted of three counts of theft by swindle.  He may not yet have been sentenced.  Big Joe was handed a sentence of 180 months, and Little Joe could steal the nickname from his paw with a 240-month sentence that Hennepin County is expected to ask for later this month.  Neuberger cooperated and testified in the trials and is expected to receive a lesser sentence based on his assistance in the case.  The news reports on this case are so numerous that I have been unable to confirm a specific number of houses or amount of fraud.

Rounding out the convictions that haven't yet been sentenced, we have Mortgage Planners, Inc. and Jim Ober, Wendy Ober, Raul Pliego, and Alex Sanchez.  The Obers owned and operated Mortgage Planners out of St. Paul, and a "foreclosure relief" firm called Eagle River.  Pliego and Sanchez were loan officers at the brokerage.  Each of the defendants is charged with racketeering, theft by swindle, concealing criminal proceeds, and identity theft.

Mortgage Planners and Eagle River represent what I would call the next generation of mortgage fraud.  In years past, we had straw buyers, flipping, and concealment of funds during the closing.  The Obers, Sanchez, and Pliego employed a new tactic.  They first "created" equity based off of a lender's low bid at a sheriff's sale proceeding.  (In other words, when a lender bids less than the amount owed or less than the home's value at the sheriff's sale.)  They would then recruit straw buyers to purchase the property using fraudulent mortgage documents - a tried and true fraudster trick.  Down payment funds were staged, meaning that the funds were transferred into the straw buyer's account only for the purpose of obtaining a mortgage.  The defendants also forged divorce decrees in an attempt to recuse the straw buyers from financial obligations on their credit reports.  They really left no fake stone unturned here.

Finally, they would place phony junior mortgages on the property, and used the fraudulent loan activity to generate FHA-insured mortgages.  The fake second mortgages, when paid off, would direct substantial kickbacks to the fraudsters - upwards of $50,000 to $100,000 per transaction.  This case was investigated by HUD, the Minnesota Department of Commerce, and Hennepin County.

(As an aside, the mortgage geek in me is just DROOLING over the prospect of reading those court documents.  A new wrinkle in mortgage fraud, defeated by the combined might of three enforcement agencies...getting my hands on the arcane details these documents contain just might be my ultimate fantasy.  Wait, no.  The ultimate fantasy would have to include me sitting on a tropical beach, sipping a Mai Tai, with Penelope Cruz reading the documents to me in a sultry voice, and all the while a highly-trained cadre of ninja assassins defends us from the oncoming zombie horde.)

Now, where was I?  Oh yes, mortgage fraud.

This scheme originated $11 million in fraudulent FHA mortgages through just one lender, and an estimate of the total amount of fraud is nearly $23 million.  Over sixty residential properties in Minneapolis are involved.  Jim Ober, Wendy Ober, and Raul Pliego pleaded guilty to racketeering.  Prosecutors will seek 150 months of sentencing for the Obers, and because Pliego assisted with the case, his sentence will be capped at 103 months.  Alex Sanchez remains a fugitive.

This brings our running tally to:

There are other mortgage fraud convictions on top of these, but the list here encompasses the highest-profile cases.  Mike Freeman, the North Side says a collective "Thank you."
Posted by Jeff Skrenes at 12:11 AM