Cooking With the Feared Ghost Pepper 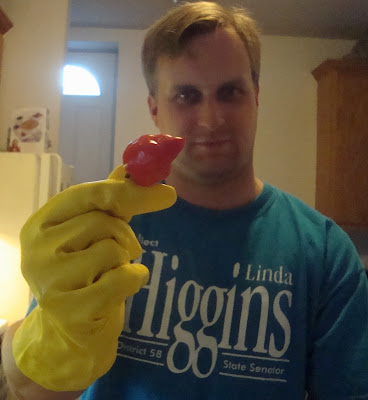 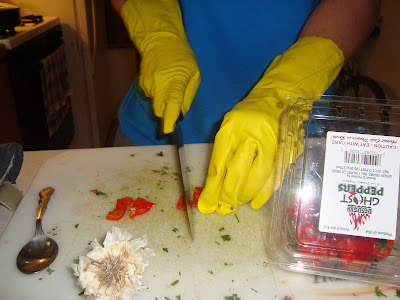 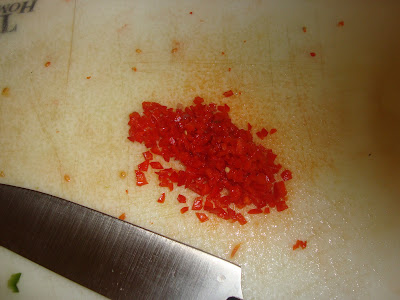 Earlier this year, I heard an NPR bit about the hottest pepper on the planet, the ghost pepper, or bhut jolokia.  This little baby is so strong that farmers in India and Bangladesh - where it is native - cut it open and rub it on fenceposts to SCARE OFF ELEPHANTS.  In fact, in India, the government is actually looking at weaponizing it as a tear gas/crowd deterrent.  Do you sometimes have trouble with a jalapeno?  Well, that clocks in at about 1,000 Scoville units.  The hottest habanero can get up to 577,000.  A ghost pepper hits as high as 1,050,000 - 1,300,000.  The Scoville scale is imprecise, as the same kind of pepper can vary in hotness depending on cultivation conditions.  At times the Trinidad Scorpion pepper has measured around 1,463,000 on the scale, and could now be considered the hottest pepper in the world. "Trinidad Scorpion," which would make an excellent name for either a death metal band or a WWE wrestler.

There are peppers that are simply hot.  Then there are those that make you respect the pepper.  Finally, you have spiciness that's the equivalent of a religious experience because it makes you realize there are forces in this universe that are far more powerful than you will ever be.  The ghost pepper is one such experience.  I've tried it once before, on chicken wings in a restaurant in the Upper Peninsula of Michigan of all places.  In terms of the religious aspect, it did not disappoint.

I turned a healthy shade of purple, I was dripping sweat from just about everywhere, the entire lower half of my face was numb, and I needed two beers to chase down six ghost pepper wings.  It was glorious.  If there is a Heaven, it might be exactly like this.  If there is a Hell, then these meals don't come with beer.

Naturally, when I saw the ghost peppers for sale at Cub on Broadway, I absolutely had to try my hand cooking with them.  There was one little problem though...
...namely, HOW TO COOK IT?  I did a fair amount of research, and most Google entries consist of discussion forums where people whine about how hot this is, youtube videos of those foolish enough to eat them whole (I'd put a link up to one, but every one I watched contained people using Very Bad Words), and websites where you can buy ghost pepper sauce.  Actual recipes are rather scarce.

We've come across this before on NoMi blogs, primarily over on Johnny Northside.  Guifiti (which is not very good, I have to admit),  bugs, and snails are just a few of the things we've tried eating with varying degrees of success.  So, in the interest of forging a new path for others to find out how to cook with ghost peppers, I picked up a pack and went to work.  I learned to cook from the grandma school of cooking, where amounts and specific ingredients are never certain, so I'm doing my best to reverse-engineer the chili:

In one pan, saute the following ingredients:
1.5 pounds of lean ground beef  (VEGETARIAN/PETA-FRIENDLY DISCLAIMER:  No animals were harmed in the making of this recipe.  Oh, except for the cow.)  (SECOND VEGETARIAN/PETA DISCLAIMER:  for a meatless version of this same recipe, simply read this article and then continue as directed.)
1 bell pepper, minced
1 poblano pepper, minced
1 red onion, minced
10 oz. cherub tomatoes, cut in half
1/2 head of garlic
cilantro, cayenne pepper, red wine to taste
2 ghost peppers, seeded, ribbed, and minced (the recipes online called for one ghost pepper)

(I realize I am adding four ghost peppers here.  First, I do have a rather high tolerance for spicy foods.  Second, these particular peppers were grown in California, not India.  That might have something to do with it.  Or try adding one or two as well as the seeds.)

Drain off the grease from the pan with the meat, combine the ingredients, and simmer for a while more.  (how long, you ask?  What, you can't figure out when chili is done?)  Serve with cheese and sour cream (the vegans are now calling this "cultured cow nectar.") and a side of tortilla chips or corn bread.  Have a healthy supply of beer to wash it down. 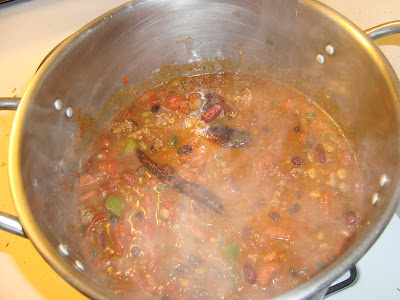 And now that I know how the ghost pepper at our local grocer tastes, I'll get more creative with other recipes.  Until then, check out Cub on Broadway for a surprising variety of rare fruits and vegetables.
Posted by Jeff Skrenes at 12:21 AM