"Where is BLM After Northside Shootings?" That's a Loaded Question. 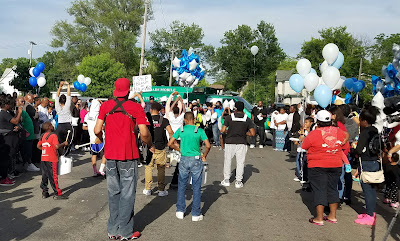 One of the refrains I see on social media after shootings in north Minneapolis is the question of why people associated with Black Lives Matter aren't out protesting against that particular shooting, or why BLM isn't speaking out against issues like Black-on-Black violent crime.  I've felt that most of those queries, especially coming from Caucasians or those not affiliated with BLM were misguided at best.

That chorus began again after the tragic shooting death of Birdell Beeks, and I can tell you where Black Lives Matter was...

Four and a half years ago, I was at a Hawthorne environment committee meeting, and the icebreaker was to say our name and the "greenest" thing we did that day.  "I picked up trash around Farview Park," or "I recycled a pop bottle" were common introductions.  When it was my turn, I said, "My name is Jeff, and today I had an offer accepted to purchase and rehab a home that would have otherwise been demolished."  I think I won that round.

On April 1st, the Minneapolis City Council wasn't playing a joke when they adopted a ban on plastic bags that are ubiquitous at most retailers.  They received a fair amount of criticism for taking up the issue in the immediate aftermath of the decision not to prosecute the officers involved in the shooting of Jamar Clark.  Personally, I found the timing to be a bit tone-deaf, but I don't mind an elected body that can focus on more than one hot-button issue at a time.

I'm not entirely opposed to a plastic bag ban.  I do use them occasionally, but would just be more conscious of taking tote bags with me if I must.  But there are two main issues I have with this proposal...
Read more »
Posted by Jeff Skrenes at 10:42 PM 1 comment:

Small Mistakes Will Cause Big Problems for Bikers on 26th Ave 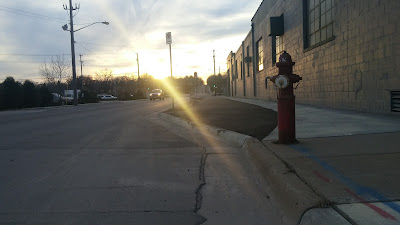 Last fall, several northside bicyclists got together to see how the 26th Ave bike path was shaping up and to take a look at possibilities for riverfront connections at the end of 26th.  That's when we noticed the curb cut above.  The problem with this design, in case it's not obvious enough, is that the sidewalk and the bike lane bottleneck right at the point where we also have a fire hydrant.  There is literally no way for a biker to get on or off the bike path without either jumping a curb into traffic or jostling for sidewalk space with pedestrians.  Thanks to the building that abuts the sidewalk, there isn't even anyplace else for bikers or pedestrians to go to avoid conflicts with vehicular traffic.

We chalked that error up to the possibility that larger trucks along the industrial corridor may need a wider berth for their turns.  And for the time being, there will be very few pedestrians and bikers starting their route on the east side of 2nd.  Until a 26th/riverfront connection is cemented, there isn't much of a reason for bikers to be on the other side of this intersection.  So we chalked this up to one more mistake in a series of bad designs between Washington Avenue and north Minneapolis river connections.

What Happened to the Alondra Cano Ethics Complaint? (And Why It Matters) 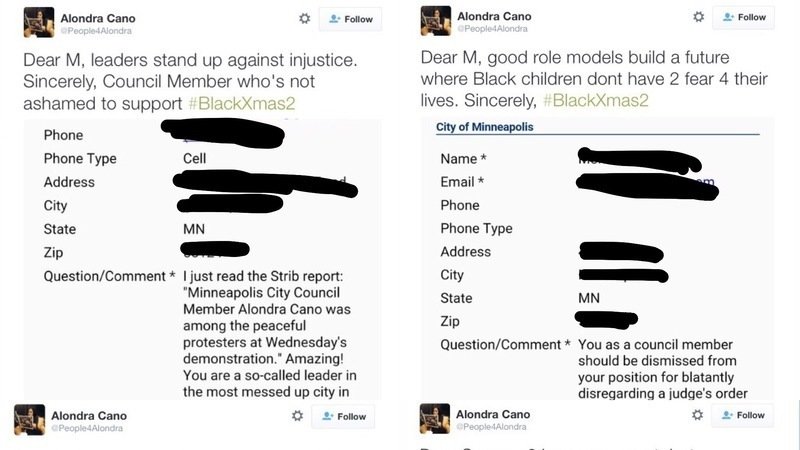 Late last year, Minneapolis Council Member Alondra Cano found herself in a controversy of her own making when she attended a Black Lives Matter protest at the Mall of America, and used her Twitter account to publish the names and addresses of several of her constituents.  One of them filed an ethics complaint, or at least publicly stated his intentions to do so.  The issue was picked up nationally, and even on a global scale, with mainstream media calling it "doxing" and local bloggers offering a spirited defense of why this was not a violation of that nature. (The link to that particular post has gone dead, and will be added here if it gets back online.)

On a personal note, I think it's great when elected officials join the public in direct action such as protest, and wish more would do so more often.  I especially applaud Cano for taking part.

When that post was published, it took the story to a completely different place than what Minneapolis needed it to be, if we're to learn from it and arrive at better local governance.  Cano's actions weren't "doxing," and almost certainly didn't violate any laws.  They may, however, rise to the level of an ethics violation.  And that's where Minneapolis needs its elected officials to aspire to behavior that better facilitates constituent interaction with local government.

From Cano's post-Twitter interviews where she refused to apologize and even insisted she would do it again, it's clear she doesn't understand the implications of her actions.

I do not think the Council Member acted out of ill intent, but instead...

North by Northside is Back

"Nobody cares why you haven't been writing.  They care what you write ABOUT," said a good friend of mine when I started to explain why I needed to write a post about my prolonged absence from the blogosphere.  And she was right.  Plus, I basically wrote that column already.

In any case, the reasons essentially boil down to "I was doing other things that aren't particularly interesting to write about, but I have remained active in working to make north Minneapolis a better place."  And that's not an interesting blog post.

But North by Northside is back.  I plan on writing at least one post a week, most likely on a Saturday or Sunday, and hope to average six to eight posts a month.  I want to remain focused on housing, housing preservation, good local governance, and biking/transit.  I'll be blogging through the lens of how north Minneapolis is impacted by these issues.