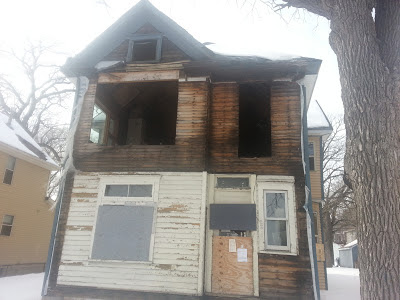 There are a few vacant properties in Hawthorne and Jordan that I watch over, well, like a hawk.  So much so that even when driving by, I can tell out of the corner of my eye that there is a new notice posted on the door.  Most of the time, I can tell the difference between a water shut-off notice, a tax-forfeiture notice, condemnation, work permits, and other such "regulatory plumage" even at a distance.  I've impressed friends and colleagues by knowing the difference not only by the color of the notification, but even the tape used to affix, or the format and typesetting that is visible at a distance.

It's not often that an entirely new sort of notice shows up, and when it does I am immediately fascinated.  That's exactly what happened today at the infamous "Mr. Slummy" property at 2515 3rd Street North.  That's when I saw...

In many ways, this is public discourse and public service at its finest.

Several weeks ago, I and other northside housing activists noticed that quite a few tax-forfeited properties were winding up in the hands of slumlords.  The more we looked at the issue, the more we realized that the system was essentially set up to enable those property owners and shut out good ones.  It only took one blog post (and some discussion on North Talk) before County Commissioner Linda Higgins and Minneapolis Council President Barb Johnson responded and set up a meeting.  I used a second post to lay out some potential solutions prior to that discussion.

Higgins and Johnson came prepared, however.  At that meeting they and city and county employees laid out a series of proposals for how to limit such problematic acquisitions.  I believe we all left that meeting energized about changing our community for the better.  At least as a citizen, I am tremendously excited when there is swift constituent response, especially when that response comes with solid proposals that our elected officials come up with.

Much of those are already being put into action, as Commissioner Higgins' most recent newsletter indicates.  In case the link goes dead after a while, the pertinent items are:
Read more »
Posted by Jeff Skrenes at 10:58 PM 1 comment: 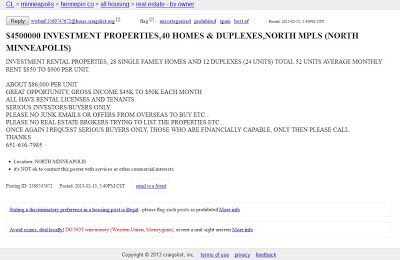 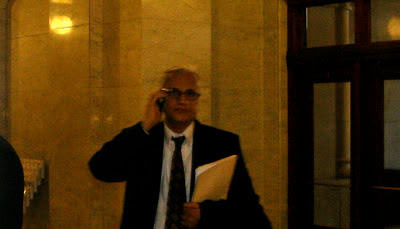 Rally the troops!  Public, private, and non-profit!  This may be a tremendous opportunity to turn around the neighborhood in one swoop. 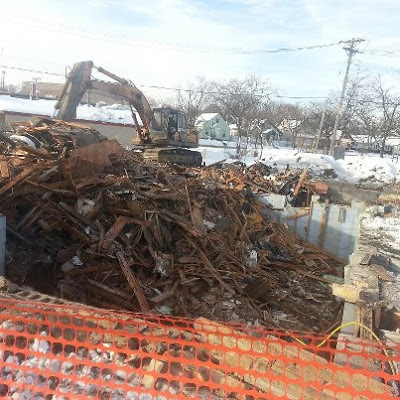 Every year on the City of Minneapolis website, a list of tax-delinquent property owners gets published.  The list can be a bellwether for up-and-coming slumlords, or can be a way to find out which properties are owned by known bad actors (since the city's website doesn't allow for the public to search by owner name).  The 2012 list isn't out yet, but 2011 shows a common pattern many on the northside hadn't noticed before.  There is frequently a different "billpayer" than the taxpayer/property owner.  Why would this be?  Friends and neighbors, some of whom are more knowledgeable in housing intricacies than I am, haven't been able to figure this out.

Our first thought was that the difference in names indicated...