This House is Disappearing 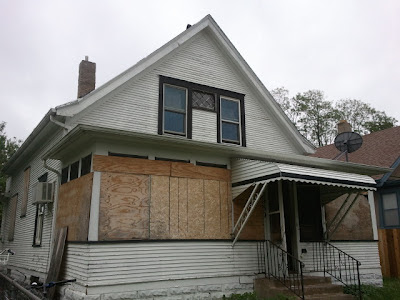 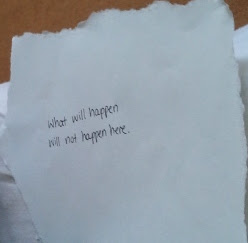 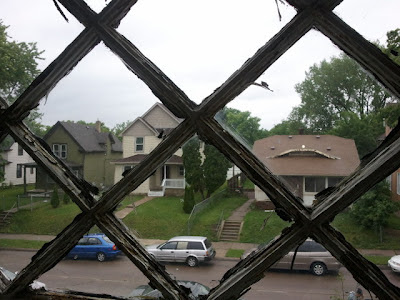 Over the past month, a group of artists have been working at their craft at 2930 Newton Avenue North.  The house is owned by the city of Minneapolis, and according to the artists, is slated to be demolished.  The imagery here is centered around the temporal nature of this house as it heads towards its demise.  I had the opportunity to visit the home both during the opening and closing sessions.  What I found here invoked a sense of loss, a remembrance of the past, and frankly a seething level of frustration that a home perfectly able to be restored could somehow be torn down.

Others may be more detached; I cannot separate the fate of this house from the art created within.  I think that was kind of their point, driven home immediately when one walks in the door and sees...

Email ThisBlogThis!Share to TwitterShare to FacebookShare to Pinterest
Labels: 2930 Newton Avenue North, This is Disappearing 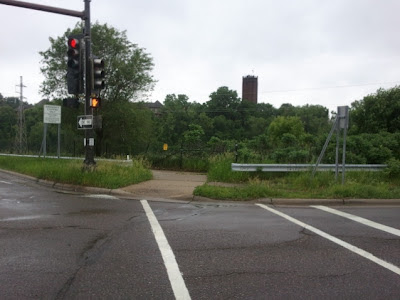 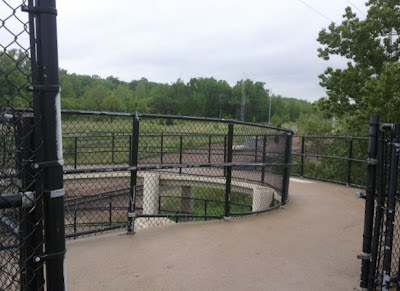 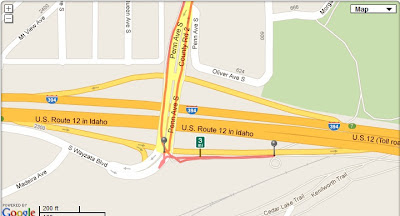 In a post earlier this week, I lamented about several bike amenities missing from north Minneapolis, and from Penn Avenue in particular.  One of those items was a connection between Penn Avenue and the Cedar Lake/Kenilworth bike trails.  A commenter posted that I was wrong about the lack of such a connection, and that one does exist.  Since there is no bike lanes striped on Penn, I hadn't taken that street to its end while traveling on two wheels.  I've looked for a path that would have been direct line from where Penn and Wayzata meet down to the trails.

Instead, that connection is tucked off to the side of the freeway entrance ramp, which leads to a spiral bike ramp going down to the other bike trails.  There are also paths that can take you through the Bryn Mawr Meadows Park and then up to the Bassett's Creek Trail, although I didn't feel like braving the rain to explore those.  Another day, certainly.

I have a friend who spent a year going pretty much everywhere by bike, and when I told her about my mistake and newfound bike trail, she said the same thing I had thought.  Namely, that she looked on the bike maps for the connection, didn't see it on the southern curve of Penn/Wayzata, and always assumed it wasn't there.  So at least I don't feel so bad about missing it myself.  The good news is that north Minneapolis has a route to south's chain of lakes that is actually more direct by bicycle than by car.  (Penn down to this connection point, then the Kenilworth Trail to Lake of the Isles and Calhoun)

We still need those bike lanes striped on Penn in 2012-13 though.  Without them, our bike maps won't lead riders to this great asset in the first place. 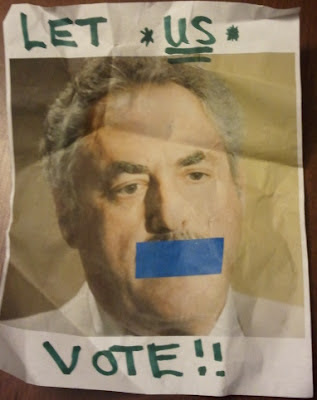 In all likelihood this will be the last post dedicated to The People's Boondoggle until elections come around, as the gang of seven and the NFL have succeeded in trampling over the Minneapolis city charter.  At this point there would be only one obscure way to overturn the legislature's and council's votes on the topic.  It's possible, however unlikely, that the Minnesota Supreme Court could rule the appropriations bonds needed for financing to be unconstitutional.  Even then, there are several ways to work around such a ruling--like allowing a different entity to issue the bonds and then having the state cover that department's operating expenses.  A lawsuit is always a possibility, but from my reading of various aspects of the issue, I think the governor and mayor have that angle pretty well sewn up.

However, Council Member Cam Gordon did seek a legal opinion on whether a vote for the stadium would violate a Minneapolis CM's oath of office.  He was quite eloquent in the Minneapolis Issues Forum, where he said... 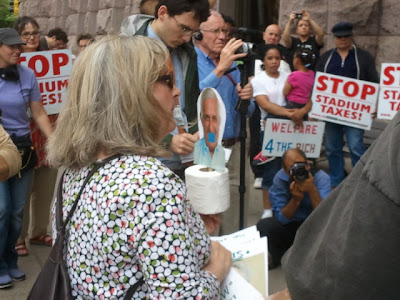 Several weeks ago, the Vikings Stadium bill was described as a "Hail Mary," the last-second deep pass play in football with little chance of success.  In reality, it was more like the closing scenes of a poorly-scripted WWE wrestling match.  You might be rooting for the nondescript everyman in blue spandex, but sooner or later we know that the referee will turn a blind eye so that a hulk with a moniker like "Captain Anabolic" can knock him out with a folding chair.

So the Vikings got their hail Mary, but thanks to that blind eye from both our city attorney (no referendum, no motions) and a legislature that undid Senator Marty's amendment that would have upheld the city charter, the Wilfs and the gang of seven got the ball back too.  And just like the end of a football game when the leader has possession, these officials appear primed to sit on the ball and let the clock run out.

CMs Gary Schiff and Cam Gordon accompanied fifty or so protestors at City Hall yesterday, speaking in favor of such novel ideas as upholding their oath of office and allowing Minneapolitans to vote on stadium spending.  Only fourteen years ago, Minneapolis voters sent a message loud and clear:  When it comes to publicly financing professional sports stadiums, we do not trust our elected officials to do the right thing and negotiate deals that are in the best interest of our city.  Over 62,000 people across this city voted in favor of that referendum.  And the Minnesota Taxpayer's League conducted an admittedly unscientific poll about the stadium in four key wards.  Fifty-five percent of people who voted in the last election said they oppose the current stadium proposal.

Contrast those results with other elections, such as... 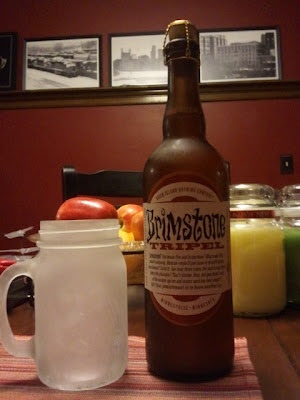 Yesterday marked the premiere of Boom Island Brewing's new beer, Brimstone.  The new brew is on tap at Eli's Food and Cocktails.  Unbeknownst to me, Eli's now has two locations, the downtown spot and a new restaurant over in Northeast.  I went downtown, and missed out on the debut of Brimstone on tap.  That turned out to be a fortuitous mistake, because... 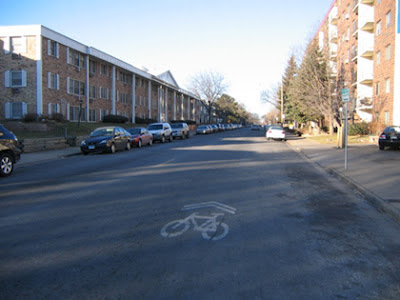 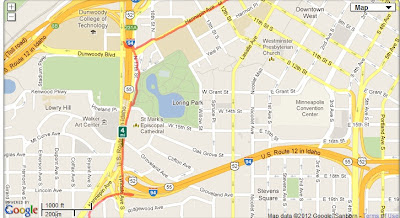 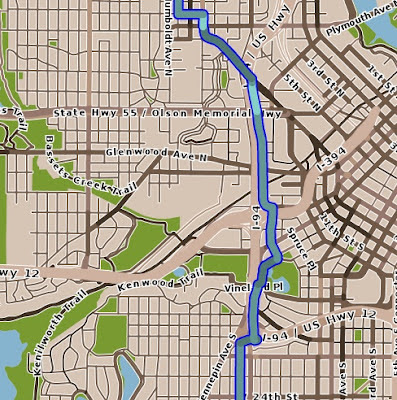 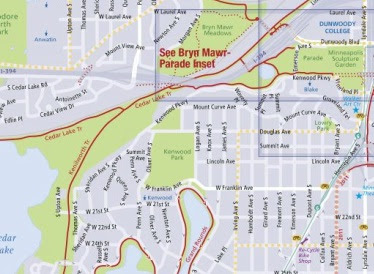 One of the things I looked for during my 30 Days of Biking challenge was other kinds of bicycle infrastructure that we simply do not have in north Minneapolis.  Three main bike additions jumped out at me, especially when I made a trek to a meeting deep in south Minneapolis by bicycle.

First, the Bryant Avenue bike boulevard is simply wonderful.  Here's how that works... 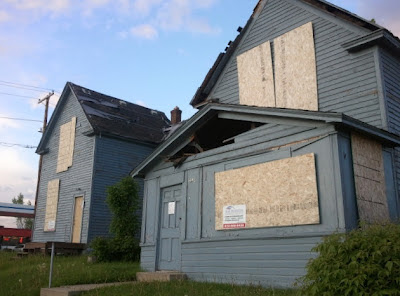 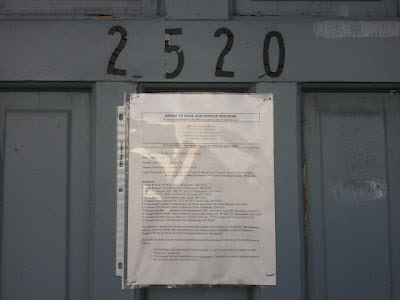 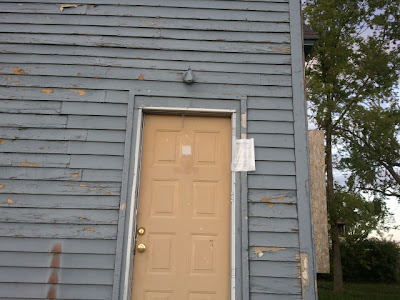 After seeing an email notification yesterday about the pending demolition of 2522 Penn Ave N, one of two decrepit houses owned by local disinvestment specialist* Keith Reitman, I decided to stroll over to the corner of 26th and Penn for photographic evidence.  Much to my pleasant surprise, a demolition has also been set for the other twin at 2520 Penn.

The latter is particularly impressive because 2522 has apparently already been purchased from the city.  Currently it seems that 2520 is still owned by Reitman and perhaps a host of others as well.  I'm hoping that the city does manage to hit Reitman with the demo fee in this case, instead of capitulating and buying him out at what could be an inflated price.

Photos of the demo orders after the jump...

30 Days of Biking, and Beyond 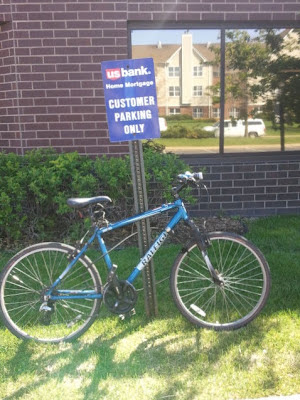 During the month of April, I decided to take the 30 Days of Biking challenge.  The goal of the challenge was to bike at least once a day for the 30 days of the month.  The bike trip could be something as short and insignificant as a 30-second trip around the block, but participants pledged to do at least that.  I admit, there were times when that was precisely what I did.  This is the season of hockey playoffs after all.  So on two or three occasions, I slipped out during a commercial break and biked around the half-block of a pocket park in front of the house where I currently live.

Most of the time, however, I was a much more diligent bicyclist.  I set out to do as much as I could on two wheels instead of four.  I logged everything on Runkeeper so I could keep track of my bike usage.  I biked a total of 89 times, for a total of 153.9 miles.  With the old gas guzzler of a car I'm driving until it croaks on me, I saved roughly $50-60.  My phone application also tracks elevation, and said I climbed about 7,154 feet - higher than all but fifteen of the high points in each state.  Minnesota's highest point from sea level, Eagle Mountain, is roughly 2,300 feet.

What had me most excited though was the series of trips I made by bike while I took steps towards closing on my home.  I dropped off mortgage documents locally, for a five-mile round trip, biked eight miles to and from my home buyer education course, made numerous trips to and from the house while it is being rehabbed, and even got in a sixteen-mile round trip to Roseville to sign some documents.  The only homebuying errand I did by car was to pick out lighting, and that was because someone else came along to who has much better interior design acumen.  I'll hopefully close within the month, and I plan on taking a Nice Ride to and from the closing.

The median length of my trips was 0.97 miles, and only four times did I bike longer than five miles.  Once again, this underscored how little we really need cars to get around.  But the one issue I really couldn't get past was...

Read more »
Posted by Jeff Skrenes at 9:56 AM No comments: 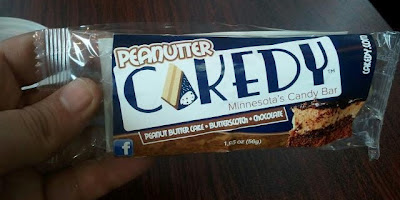 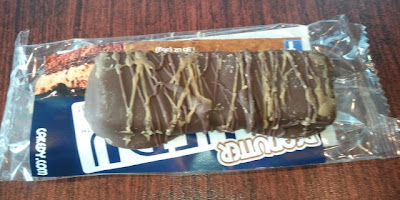 Earlier this week I had a meeting where several colleagues continued our plans to make north Minneapolis even more amazing than it already is.  It should go without saying that there wasn't enough time in the initial meeting to fully discuss our plans, so the gathering spilled over and into the Avenue Eatery, where we continued our benevolent scheming.  As I was placing my order, a colleague and friend said he wanted to make sure I tried this new candy bar that was made by a north Minneapolis resident.  He even insisted on paying for it, on the condition I promote a northside business on my blog.  Sold!

Cakedy's website is pretty whimsical, claiming that "If Willy Wonka and your cake baking granny made sweet love, the resulting lovechild would be Cakedy."  That's an ambitious claim, albeit not quite as conceited as Victory 44's "Perfect Burger," nor as preposterous as the possible slogan, "If Batman and Teddy Roosevelt were in a cage match fight to the death, but decided to settle their differences in an Iron Chef bake-off instead, the winning entry would be Cakedy."

And since I believe peanut butter and chocolate to be the best pairing other than perhaps Han Solo and Chewbacca, that's the flavor I went with.  The Cakedy candy bar has, as the name suggests, cake on the inside, as well as nougat and butterscotch chips.  It was a good thing I was sitting down already, because the concoction made me weak in the knees.  The sweetness hits all the pleasure centers on the tongue and in the brain, and the texture of the cake and nougat is sublime.  If you still think of Reese's candy products as the defining chocolate/peanut butter combo, it's only because you haven't tried Cakedy yet.

Not only are these candy bars made by a local, they're sold at the Avenue Eatery and at another northside-owned business, Local D'Lish.  On top of that, they're reasonably priced, or at least they were for me.