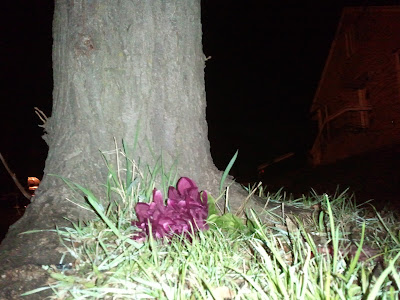 Photo of Christopher DeRonde Memorial at 30th and Colfax by the Hawthorne Hawkman.  Content of post is a press release written by Casanova Criminal Defense.
Closing Arguments set to begin Thursday in the Minneapolis Homicide Trial of Christopher Hayes
Sole clue in investigation is the costly, and possibly flawed, ShotSpotter technology
April 20, 2011 – Minneapolis, MN.  Closing arguments are set to begin Thursday in the homicide trial of Christopher Hayes.  Hayes has been charged with first degree murder in the September 17, 2010 shooting death of Christopher DeRonde.  This case has been widely reported in the media because of the Minneapolis Police Department touting the use of their ShotSpotter technology in what they say is their first homicide apprehension as a result of using this system.  The defense for Hayes claims that in an effort to justify the expense of the ShotSpotter system, the City is pushing forward in a case rife with police department errors.  The case is also unusual in that it pits family members against each other as the state’s star witness testified that it was his nephew (Hayes) who shot DeRonde.  Hayes is being represented in this case by a team of defense lawyers – Jennifer Casanova from Casanova Criminal Defense and Elise Chambers from the Minnesota Law Collective.
On the morning of September 17, 2010, Christopher DeRonde was shot near the intersection of 30th Avenue North and Colfax Avenue in Minneapolis.  At the sound of the gunshot, the ShotSpotter system kicked into action, where a network of microphones and video cameras are used to train some of the city’s 150+ public safety video cameras on the location where the shots were detected.  Police spokesmen have previously claimed that witness information would not have led to an arrest if not for the vehicle driving towards a public safety camera.  Minneapolis spokesman Bill Palmer claimed “We never would have gotten to the point where the witness would have been helpful without that technology.”  Michael James Funches and Christopher Hayes are both said to have been in the car on the video, but reports differ on who was driving.

News reports have neglected to mention the fact that ...
...the State’s star witness in this case (Funches) , is Hayes’ uncle, who is two years his junior.  Funches has already plead guilty to the lesser charge of Accessory after the Fact in exchange for his testimony against his nephew.  This charge carries a reduced sentence of only three years of actual time in prison, versus the life in prison that Funches would have faced if convicted with murder.


Previous accounts mistakenly placed Hayes in the driver’s seat.  However, on April 18th, Funches testified that he was the one driving the car that the ShotSpotter and the police placed at the crime scene.  The 2000 Dodge Intrepid is in fact owned by Funches’ girlfriend.

Defense claims that the ShotSpotter system does have limitations, and admitted flaws.  For example, the cameras did not capture the license plate of the car in question, only identifying the make and model of a car similar to that owned by Funches’ girlfriend.  The cameras also failed to show the number of occupants in the vehicle or to show the identities of the driver and any passengers.  Also, while on the witness stand, Sgt. Ellering of the Minneapolis Police Department testified he could not account for 15 seconds of missing ShotSpotter video.  This video happens just a short time after the shooting.  When asked about this anomaly, Ellering admitted that the ShotSpotter system sometimes loses minutes “and even days”.
Jennifer Casanova, defense attorney for Hayes, states “There was a consistent lack of follow up by the Minneapolis Police Department in their steadfast commitment to press forward against Hayes, who has refused to testify against his uncle.”  She says that the police were negligent in several areas:
·         Repeated 911 calls from someone in the neighborhood reflect a delayed response time.
·         One eyewitness to the incident was let go by the police without questioning.  Police later sent the Violent Crimes Apprehension Team to find and detain her.
·         Police neglected to follow up with other possible witnesses shown in the ShotSpotter video crossing the street just moments after the car leaves the scene.  If the ShotSpotter microphones caught the gunshots, it is safe to assume that these pedestrians would also have heard them.
·         Over 30 officers were on scene, but no bullet, bullet casing, or gun were ever found.
·         There was no follow up done on the trajectory of the bullet or the measurements in the car.
·         Police also claim there was no video to support testimony that Hayes and Funches both entered the apartment of Hayes’ girlfriend a short time later.  Her apartment is a short distance from the crime scene.  Police claimed that only Hayes entered the apartment building and that Funches never went into the dwelling.  Defense correctly pointed out that only later did police find the apartment building’s lobby surveillance video that both men are clearly shown entering the building, with Hayes even seen holding open the door to assist a woman with a young child.
·         The Investigator on this case did not follow Minneapolis Police Department policy manual regarding best practices for presenting photo lineups, by presenting the photo lineup herself when rules dictate that it should have been conducted by someone not involved in the case.
·         In perhaps one of the most glaring areas of neglect, the lead investigator did not even investigate the possibility that Funches could have been the shooter.

Further, on the stand, Funches’ girlfriend admitted to having legally purchased several handguns in the past year, two of which were allegedly stolen, crimes which she said she never reported to police and one of which was confiscated for an unidentified reason.
Defense Attorney Elise Chambers claims that it was Funches, not Hayes, who was driving the car.  “Funches has already changed his story numerous times since the incident.  When shown a photo of the victim, at first he denied knowing him.  Later, he admitted to buying drugs from DeRonde, but days prior to the shooting.  He also claimed that the car was never near the crime scene.  In subsequent statements and on the stand, Funches again changed his story, and admitted that not only was the car at the scene of the crime, but that DeRonde was in the vehicle that day for a drug deal.  So we have the driver of the vehicle involved, one who has easy access to handguns via his girlfriend, and who is willing to have his nephew spend life in prison for what looks to be his crime.”
Casanova states, “I wholeheartedly believe that the County Attorney cut a deal with the wrong guy in this instance.  I can understand why they want so badly to pin this crime on our client.  In a time of budget cuts and calls for reduced spending, it’s tough for the public to want to continue to invest in a Big Brother technology that doesn’t work, or at least, doesn’t live up to its billing.  When these arrests happened, Mayor Rybak and police department officials rushed out to hold a press conference to trumpet the success of this expensive technology and boasted about this being the ‘first’ homicide that the system has helped to identify suspects in.  We think the City of Minneapolis is looking to send an innocent man to prison to justify keeping a flawed and expensive technology.”
##
Posted by Jeff Skrenes at 11:25 PM