Building up to the Grand Rounds 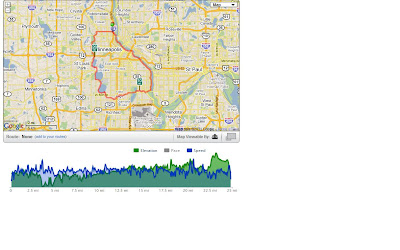 Post, photos, and above image by the Hawthorne Hawkman

Where has the Hawkman been lately?  Taking advantage of the great weather and getting out on our bike trails.  My normal route starts at my place, then goes down to the river and to Minnehaha, across Minneapolis, back north around the lakes and Theo Wirth Parkway, then along 26th Avenue back home.  It's a 25-mile round trip and I can usually finish it in about two hours.

While on this trip, I stopped at a kiosk and noticed something oddly frustrating about the bike map. 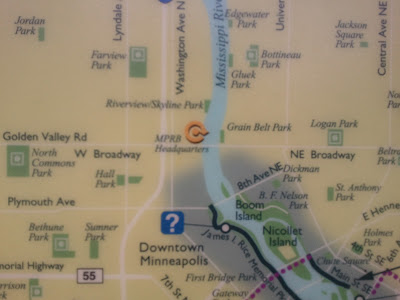 Even though the Park Board headquarters are in north Minneapolis, the designated Grand Rounds trail stops at Plymouth Avenue.  Plymouth, by the way, is the southern border of north Minneapolis neighborhoods at that particular junction.  Why didn't the Park Board mark the Grand Rounds all the way to the end of the bike path along the river?  What we're left with from this map is the false notion that the bike trail stops before you enter NoMi.  It's like the old maps of uncharted waters, that tell travelers "Here there be monsters."

Putting some of the blame back on north Minneapolis neighborhoods' shoulders though, much of the bike paths along the river and lakes have signs telling you which neighborhood or community you're in.  We haven't done that for ourselves.  If we expect the Park Board to acknowledge our existence on the Grand Rounds trail map, we need to put up our own signage.
Posted by Jeff Skrenes at 11:30 AM

Email ThisBlogThis!Share to TwitterShare to FacebookShare to Pinterest
Labels: Bicycling in NoMi, Minneapolis Park Board