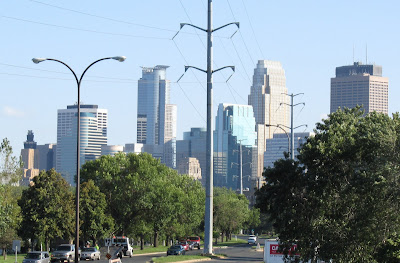 When I get together with friends from across NoMi and we solve all the world's problems, one topic seems to come up with increasing frequency: what would make us patronize area businesses? More to the point, since this conversation is probably ALREADY happening at Good Sports, Broadway Pizza, or Donny Dirk's, what would draw OTHER PEOPLE from outside NoMi?

And that brings us to what Broadway Pizza needs: an outdoor patio. My goodness, look at the view! Today was such a gorgeous day, who WOULDN'T want to eat outside, looking at the Minneapolis skyline and the river?! The view at night is perhaps even more astounding, although harder to capture in a photograph. While I'm daydreaming, it would also be cool to light up the Broadway Avenue bridge like we do with 35W. 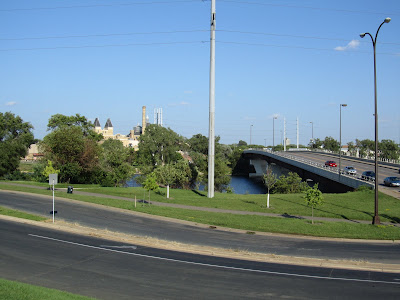 What bothers me here isn't just the fact that we're missing out on something amazing. The person who brought this to my attention has spoken with Broadway management about this very issue. He was told that they don't have an outdoor patio on this spot because they're worried about drive-by shootings. Really?

I can understand that concern back when Johnny A's and Stand Up Frank's were your two neighboring establishments. But there's really no excuse now. And the fear that nothing good can happen because things were rough before is something that really holds our neighborhood back.

I like Broadway Pizza a lot, and not just because of their great political campaign victory parties. So I'm not looking to publicly shame them in any way. But people should call or stop by and tell the management what a great addition to NoMi this would be. Most importantly, tell them how much more often you'd come by or recommend the place to your friends. Let's make it clear to Broadway Pizza that the outdoor patio would be a financial boon. And by next summer we'll have the best restaurant view in all of Minneapolis.
Posted by Jeff Skrenes at 7:36 PM