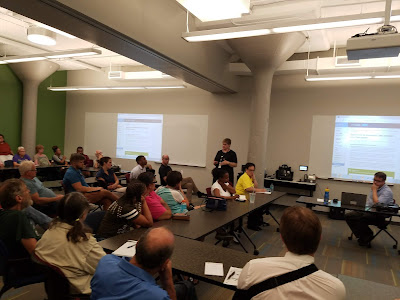 
The aspect of this plan that gets the most pushback seems to be the "fourplexes everywhere" notion, which will - and yes I say "will" not "might" - lead to the acquisition and demolition of affordable single-family homes throughout the city.  However, the loss of one built form in parts of Minneapolis, while I oppose that loss, is to me the least interesting fault of the plan and among the least compelling reasons to rally against it.  I look at 2040 through the two questions of "How does this help north Minneapolis?" and "Who benefits?"  This is where Minneapolis 2040 utterly fails and falls entirely short of what its purported benefits may be.

Minneapolis 2040 and its loudest pro-density advocates seem, from my perch on 26th and Penn Avenues North, to view the entire city through the lens of "everyone should be able to live in southwest Minneapolis and Uptown, and if we only build enough luxury high-rises with enough mandatory affordable units, then our grand utopia will be achieved."  In principle, I agree that our upper-class sections of this city do need to allow for more low- and moderate-income residents to live where they choose, and that will invariably mean some new density is part of that goal.  But I have not been convinced that building another downtown micro-unit edifice for single people making twice what the north Minneapolis median income is, that these developments or more fourplexes in southwest will benefit the low-income renter over north or the moderate-income family looking to afford their first home in this part of the city.

I mean, I suppose when a butterfly flaps its wings on another continent it affects us in some degree.  Oh, and climate change is thrown in there, but an actual discussion of embodied energy expended through demolition and new construction is notably absent.  Sorry butterflies, but you may be on your own.

The lack of specific proposals at this point, while understandable given the purpose of the 2040 document, also makes it far more difficult to articulate how north Minneapolis is different from much of the rest of the city when it comes to ways to address historically pervasive problems.  We are almost in a "through the looking glass" situation where everything that makes sense elsewhere accomplishes the exact opposite goal when indiscriminately and arbitrarily applied here.  Two examples around housing are demolitions and new construction.

Demolitions in south Minneapolis tend to be market-driven, either by buyers who want to tear down a smaller home for a larger (sometimes too large) new construction, or developers who want to tear down and add density.  In both cases, the teardown happens because there is a plan for what to do next and money to make it happen.  During the post-foreclosure crisis demolition spree over north, it was local government that was behind most demolitions.  And a large number of those parcels had no future development planned other than to bank the land for future construction.

So before we even get to the point where we put a value judgment on demolitions in either part of the town, we have to acknowledge that the socioeconomic and political forces behind those demolitions and the plans for the properties post-demo have been completely different over north than in south and southwest and northeast.  If we apply the same value set to that issue citywide, or assume that the same policy around demolitions would accomplish building stronger, more equitable communities in both parts of the city, then we fundamentally misunderstand the differing dynamics of north Minneapolis.

Likewise, new construction has a recent history of being used against north Minneapolis when it comes to the "Dream Homes" phenomenon.  One-Man Housing Crisis Paul Koenig and other unscrupulous investors swept into the community and built scores of substandard new homes.  These houses just barely met code but were so poorly designed for their occupants and the surrounding community that the only way the city council saw at the time to stop their spread was to enact a moratorium on new construction in north Minneapolis.  No other part of the city needed such a blanket moratorium to dissuade this sort of predatory investment.  Even as much as I may decry certain kinds of new construction, I still recognize that it's of a high enough quality and can reflect what people actually want.  The only bar the Dream Homes met was that they were at minimum code standards.

Now, can you imagine what the next Paul Koenig would do if he or she could build homes on the cheap over north, but instead of rental income from one unit, they'd have four units?  The damage that could be inflicted upon north Minneapolis would be nothing short of catastrophic.

Even with such concerns at the forefront, I personally WANT more fourplexes on vacant lots in my neighborhood.  But the 2040 plan needs to have safeguards built into the plan or concurrent council proposals must recognize and mitigate the risk of substandard housing stock.  I do not see that language in the plan and I have not heard our leaders articulate an understanding of our recent past or how to avoid repeating it.

Until our council members and the authors of the 2040 plan can fully express how it helps north Minneapolis and how it addresses dynamics that are different here than in other parts of the city, this plan is not ready to be forced upon this community.

If it were implemented in its current form, who would benefit?  The plan's more ardent supporters claim that 2040 is meant to address historic racial disparities that have inexcusably been a part of city housing policies and mortgage lending practices.  But its blanket proposals to add density do little more than help the invisible hand of the market slowly lower rental rates and vacancies over time.  I share that goal, but if that's the sum total of your plan to address racial and economic inequity then you are falling well short of that aspiration.

Creating ways to add density to a part of town that doesn't need it for its own economic vitality does nothing to build anew on the swaths of vacant land in north Minneapolis.  Home ownership is still the single greatest way for low- and moderate-income families to build generational wealth.  Even as difficult as the market is for starter homes, that's as true as it ever was.  The 2040 plan does not speak to how north Minneapolis residents can better access that wealth building tool, whether it is in our own community or beyond.  Building a new fourplex at even a conservative $600,000 cost would require a down payment of at least $21,000, and a household income of over $80,000 to qualify, even with the projected rental income to assist in that regard.  Those minimums are well beyond the means for virtually any low- or moderate-income family to achieve.

The revenue generated from the equity and the rental incomes will go almost exclusively to rich, predominantly white, out-of-town investors.  Neither the plan nor its authors have mapped out how the plan helps to build generational wealth, nor have they explained how the new landscape will attract quality investment to a full quarter of the city's land mass.

Throughout much of the city, the opposition to the 2040 plan is that it is a bridge too far; it does too much to change parts of the city all too fast.  But through the looking glass of the north Minneapolis perspective, the 2040 plan does not do nearly enough.  The plan is not ready to be enacted, and needs to be brought back to the drawing board for significant revisions.