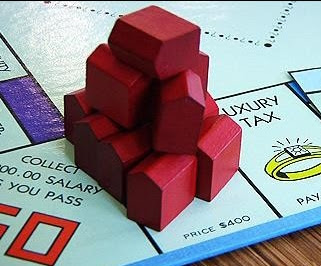 Before delving too deeply into the statistics, here are a few of the presumptions I made:

These units seem to be renting for anywhere from $1,800 to $2,300 per month in parts of south and northeast Minneapolis, so we'll call it an even two grand.  That's $96,000 per structure in rental income per year.  Most mortgage companies would just take 25% off the top for the sake of calculating a qualifying income.  We're going to be a little more precise.  Taxes might wind up at $12,000 per year and I'll ballpark insurance at $2,500.  Could be a fair amount more depending on what gets covered though.  Then we take off 10% ($9,600) each for vacancy/maintenance and lawn care/snow removal.  That net profit comes to $62,300.

So if you started with $825,000 of your own money, made $62,300 each year off of that investment, and sunk the entirety of those proceeds back into repaying yourself, you'd break even in thirteen years and three months.  After that, everything is pure profit.  But of course people who spend their time thinking about the best way to spend eight hundred G's to turn a profit don't do that with their own money, goodness no.  So that investment comes from a down payment and a small business or multifamily real estate loan.

One such loan may offer terms at 5.5% interest with a 25-year amortization and a 20% down payment.  So in this case, now we're only using $165,000 of our own money and borrowing the rest.  That comes out to a $4,053 monthly principal/interest payment, and cuts the profit down to just under $14,000 per year.  It doesn't fundamentally alter the time it takes to break even on the out-of-pocket investment, and it takes significantly less cash to get started.

Now let's compare that to building on a city-owned vacant parcel on Penn Avenue North.  We'll assume the city in its benevolence will give the land away for free and there are no demolition costs.  So the up-front investment is only needed to build that $600,000 fourplex.  Rent here seems to be about $1,200 per month on these units.  So we're bringing in $57,600 per year in gross rent.  Taxes are going to be lower, but insurance could be higher, so we'll put that at $6,000 per year in taxes and $3,000 for insurance.  We take out the same 20% in vacancy/maintenance/snow/lawn costs and that leaves a net profit of $37,080 each year.

And that, dear readers, means it takes sixteen years and two months to recoup the $600,000 investment.  The $825,000 demo/new construction makes its money back almost three years faster.  That's not too far off, but if this model is even somewhat accurate it will still be more cost effective to tear down existing houses elsewhere instead of building in north Minneapolis.

But what if we only used a 20%/$120,000 down payment?  The same financing terms come to a principal/interest payment of $35,364 per year.  Which means after collecting $37,080 in rent after the other expenses, we get an annual return of just over $1,700.  Now I'm no business expert, but one question I like to ask about investing is "Will I make money before I am dead?"  If the answer is no, my next question would be "Am I building a fourplex or buying life insurance?"

Let me be the first to admit that these numbers are HIGHLY anecdotal.  I really want someone like CURA or other industry leaders to put together their own projections.  But the foundation of this exercise remains the same.  You cannot deny the disparities in rental rates across the city, yet we should expect the same quality of housing and the same financing terms citywide.  Which means there absolutely will be a price point at which acquisition, demolition, and new construction makes more financial sense than simply building new with no other costs.

I find it unacceptable that we would simply say that any single-family home in certain neighborhoods that is for sale at an affordable price point would now be at risk to be bought out by a developer against whom the average homebuyer cannot compete.  I find it equally untenable to create a citywide change in policy that benefits the rest of Minneapolis but passes over north entirely.  If our city council and mayor agree, then there are two conceivable responses.  Either identify that danger zone and subsidize development outside of it, or limit the zoning change to existing land only.
Posted by Jeff Skrenes at 10:17 PM