CeaseFire Under the Microscope (Part 2 in an ongoing series) 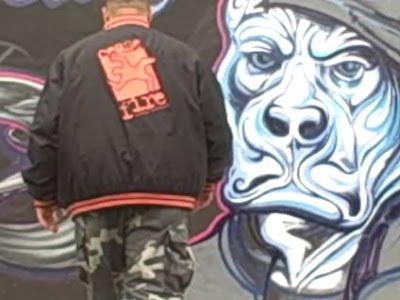 Photo from photobucket.com. Post by the Hawthorne Hawkman, who like the street art depicted above, is not too fond of CeaseFire.

As the CeaseFire model of crime prevention (assuming it actually DOES prevent violent crime) is discussed as an option for Minneapolis, I've decided to do something rather unique. I've actually read a legislative audit, and blogged about those findings. I'm also slogging through a 229-page report from Northwestern University to see a different take on the program.

I blogged about what I found there, and will continue that discussion in this post. We left off with some positive elements about CeaseFire helping people find jobs. And clients overall did say that CeaseFire was helpful. Roughly half of the clients interviewed named the CeaseFire outreach worker as an influential adult in their lives, second only to parents (66%). But, and it seems there's always a but...

"...a great obstacle to building trust and remaining in contact with clients was CeaseFire’s staff turnover. There was an absence of consistent staff retention policies and practices across sites. While there was some potential for career advancement within the organization, it was quite limited. Vertical moves were contingent upon someone leaving. Moreover, there were generally no clear financial or professional incentives for outreach workers to develop skills within their current position.

"For most outreach workers, the job was one of high risks, limited benefits and low wages...The program’s perennial funding instability also had a demoralizing impact on every level of the program, and periodically left staff in precarious financial circumstances."

Then, when outreach workers invariably did leave, they became yet another influential adult who had disappeared from their clients' lives. (Kind of the way ACORN organizers would come through a community, promise the world, and then leave after three months) And since the workers were hired due in large part to their street connections, and since client information was recorded in such a cryptic, guarded fashion, maintaining any semblance of continuity from one worker to the next was almost impossible.

This contributed to an already difficult monitoring of the program's effectiveness. How do you define "violence"? Is it a fight at a bus stop among high school kids, or something more serious? Some workers admitted they either didn't bother stopping "minor" violence, or if they did, they wouldn't fill out a form describing what happened. Conversely, others admitted to stepping in to almost any situation merely to drive up their intervention statistics. Finally, if a violent act is only delayed, even if for an extended period of time, can one really count it as violence that has been prevented?

Mistrust of the police and court system on the part of the workers didn't help either. "On most conflict mediation forms, violence interrupters offered only vague outlines of disputes and the ways they settled them, in case the court system ever subpoenaed them. In a meeting...one violence interrupter thought that generalizing the location did not ensure confidentiality. 'If you put [beat] 2525, they'll just look at the date and see if you put enough info to pop the brother's ass. You sold him out. The police can come and get it when they want to get it.'"

Another interrupter described the time he spent on the streets with people as "just hanging out." And, "Ninety percent of the time, we're just shooting the shit." As a staff person of a community group myself, I can certainly justify some degree of just hanging out and talking with community members. But NINETY PERCENT of the time? We're paying someone to do this WHY?

So, when interrupters are just "shooting the shit" and not filling out the proper paperwork to document how that prevents violence, what are they specifically DOING? First off, as stated before, they're not really big on preventing drug sales or use. If rival gangs are fighting over territory on a particular corner, CeaseFire workers will negotiate who can sell dope over here and who can sell crack over there and who can turn tricks down the street.

Rules of the street were often used to try and mediate conflicts. This was not always successful. The report gives two stories about how that hasn't worked too well. Read on:

"Interrupters did not appeal to mainstream property rights when settling disputes, but they do emulate some legal and financial practices. It was not clear how effective these were on the street. In one Latino neighborhood, a man gave a boy marijuana to sell and expected $600 in return. The boy gave him only $300, and said he didn’t have any more money. Whenever the man saw the boy, he would beat him up. The boy eventually contacted a violence interrupter, who in turn brokered an agreement between them: a re-payment on an installment plan. The boy agreed to give the man $20 every two weeks until he reached $300.

"In another conflict on the West Side, a violence interrupter arranged for a woman to be compensated for damages she had suffered. In this incident, a woman double parked, and when a man asked her to move her car, she 'cursed him out and called him a B.' As she was pulling away, the man threw a brick through her car window. He intended to hit her; instead, he hit her passenger in the mouth, knocking out some of her teeth. The victim’s cousins were 'going to do something to the dude.' But the violence interrupter stepped in and got the man to promise that he would pay for her dental work. This arrangement stalled her cousins.

"Both of these arrangements have since become uncertain. In the first incident, the older man went to prison on a narcotics-related charge. In the second, the man has still not paid for the woman’s dental work."

But the next story should get us even more worked up - not just that this sort of thing happens, but that through implementing CeaseFire in Minneapolis, we could be spending millions of taxpayer dollars to ENABLE such behavior. Specifically, we're talking about "violations," or gang beatings as a semi-structured way of meting out retaliatory justice.

"Interrupters also relied on street sovereignty when they tried to deflect potentially fatal retaliation to punishment by an offender’s own gang. In mediating conflicts, they suggested or went along with (but certainly did not participate in) 'violations,' which are timed beatings that gangs inflict on their own members. In a Northwest side conflict, two cliques from the same umbrella gang started throwing punches. As one of the boy’s mothers tried to break it up, a man from the other crew misidentified her and punched her in the face. This woman’s son wanted to shoot him, but the violence interrupter asked him to consider other options: 'there are ways to settle this without pistol play. Maybe there can be a violation.'

"In another Northwest side incident, two men from different organizations got into a fight over a woman. As they argued, one of the men knifed the other, 'slicing his face.' The victim’s organization was considering retaliating by shooting the man who permanently scarred their friend. To avoid this, violence interrupters arranged a meeting between the leaders of the two organizations. The knifeman’s organization agreed that they would violate him if the other organization said they wouldn’t shoot him. One of the violence interrupters was impressed that the victim’s crew agreed to this deal. 'It took something,' he thought, because their member was now 'scarred for life.'

"In yet another incident, on the South Side, a man was selling drugs in a public housing building dominated by another gang. When members of that organization found out about his business, they attempted to rob him and in the process 'hit one of the man’s children with a gun.' When the victim was preparing to retaliate, a violence interrupter stepped in and promised to mediate the conflict. He spoke to the other gang’s leader, who had not given the lower-ranking members permission to steal, saying of the robbers that they were 'on some thirsty, thieving shit.' Their organization made them return what they had stolen and even 'put some money on top of it for his daughter.' Furthermore, the men were violated by their own gang."

You and I could be on the hook for $2.2 MILLION in federal dollars over three years coming to Minneapolis to fund and enable such behavior. Reportedly one CeaseFire center cost $240,000 per year to run in Chicago. That would give us three such locations in Minneapolis for three years. We'll explore where that money might go in the next post...
Posted by Jeff Skrenes at 7:08 AM