All Aboard the CeaseFire Money Train! 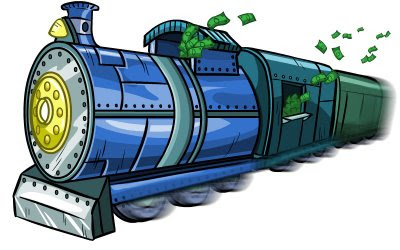 Post by the Hawthorne Hawkman, image from the We Power Video Blog.

In response to this year's rise in homicides and violent crime in Minneapolis, a program from Chicago called CeaseFire has been proposed for our city. There was an immediate outcry from virtually all sides of this debate. The arguments against implementing CeaseFire strategies here essentially boiled down to two main points:

1. There are still murders happening in Chicago, so the program obviously doesn't work. (Proponents of this point of view cite current numbers or attention-grabbing headlines without examining the overall homicide rate in areas where CeaseFire has been active.)

2. There is a bunch of money involved in the strategies, and we've been working on anti-violence issues for a long time, so why not just give us more money instead?

Now, initially, I had some sympathy for the activists wondering where their reward was for the work they've put in. After all, I would sure like to get a few million from the federal government, the ability to spend it on housing, and a few years to produce results. But then the critical part of my brain started to kick in. First off, we're talking about essentially throwing US Department of Justice money at the issue of violent crime, without putting more cops on the street. Second, it took Spike Moss all of two seconds to play the race card.

More importantly, however, is the lack of a comprehensive proposal of what, exactly, anti-violence activists like Moss or VJ Smith would do with a sudden influx of millions in federal cash. And if these folks have been working on the issue for so long and we're stuck in neutral (or reverse), then how is giving the same people money to do the same things going to actually make an impact?

Finally, the Strib articles reference several studies done on the CeaseFire program. So I thought I'd track them down for NBNS readers. The first one, a 2007 state of Illinois audit, is not promising in the least - unless of course we're promising to funnel large amounts of cash to unidentified people with no meaningful results. I'll get to the second one in a subsequent post, if necessary. Here are some of the highlights:

From 2004 to 2006, approximately $19 million in federal, state, county, and private money was spent on CeaseFire activities. The testing found that "funds did not go to the stipulated purposes." So, where DID funds go?

"During Fiscal Year 2006, the Chicago project charged $365,000 in administrative fees that was not delineated in the agreement with DOC."

"Insufficient diligence by the Chicago Project led [them] to question $371,534 in reimbursements to community partners."

"The Department of Corrections had no predetermined performance measures contained in funding agreements with the University of Illinois detailing what results were expected for the funding levels received. The agreements simply set forth payment schedules." Translated into plain English, this essentially means a bunch of people got a whole lot of money without ever doing jack squat.

Roughly half of the funds spent through the University of Illinois-Chicago had not been properly documented at the time of the report. Full documentation was required sixty days after the final disbursement, yet after 260, such verification was still missing.

"The CeaseFire budget for the fiscal year 2004 ... failed to identify 18 individuals for positions that were described as 'vacant' or 'new hire.' These positions amounted to over $187,000, or 37% of the total budget."

Documentation submitted in June 2005 showed that the program was over budget by 33% in its allocated administrative costs and fringe benefits. $750,000 in funds were not properly monitored, and even THAT wasn't good enough. That particular line item STILL went $134,848 over budget. No, I am not making this up. It's on page six of the report.

Yeah, but does the program, as wasteful as it seems, get results? After all, if it saves lives, you can't put a price on someone's LIFE, can you? Here's how the study answers THAT question: "An analysis of Chicago Police Department shooting statistics showed that while shootings have decreased in CeaseFire zones, other non-CeaseFire beats sometimes had greater decreases. CeaseFire does not always operate in the most violent communities."

But what about JOBS? The best social service program is a JOB (especially a social service job), right? People commit crimes because they don't have a J-O-B, or so the story goes. So what if all this money goes to the community in the truest sense, by creating economic opportunity? Wouldn't THAT make it worthwhile? "...the community partners only hired 69 percent of the required number of outreach workers over the duration of the contract. Additionally, community partners failed to hire over 398 worker-months positions over the course of the contracts. Chicago Project staff charged with monitoring the community partners took little action to ensure compliance with the agreements."

Oh, and in case anyone has forgotten what the centerpiece of the WHOLE CEASEFIRE PROJECT IS, let me remind you: THE SKILLED OUTREACH WORKERS. So we essentially have a multi-million-dollar program that doesn't account for its funding properly, goes over budget anyway, fails to produce meaningful results when compared with other areas of the city, and doesn't hire enough people to do the very job it claims will be so successful.

Did I mention that its funds aren't properly documented and it's over budget? Sorry if I keep stressing that, but the report seems to think this is important too. "DOC officials stated that...the only role of the DOC was to 'pass through' the funds for CeaseFire WITH NO MONITORING OF RESULTS OR EXPENDITURES." (emphasis mine. Deep breaths.)

And you start to wonder why certain Minneapolis activists are complaining about not getting this money. This boondoggle can stay in Chicago, and if we're going to spend a few million on public safety initiatives, let's start by putting more cops on the street.
Posted by Jeff Skrenes at 12:17 PM