The Big House on Hillside, Connected to THE Big House 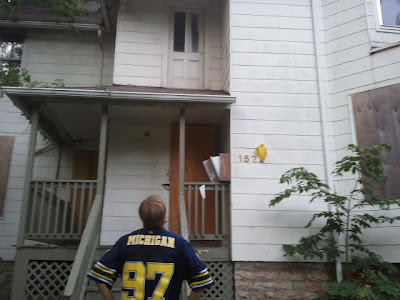 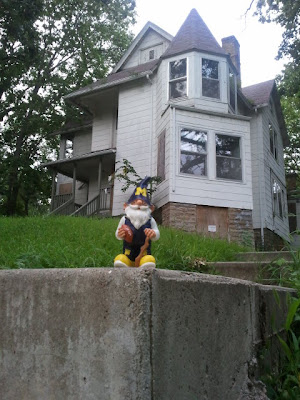 The mansion at 1522 Hillside Avenue North has long been a gateway property with the potential to set the tone for the rest of one of the Northside's most picturesque blocks.  However, for the past several years, the house near the corner of Hillside and Irving Ave N has sat vacant.  1522 was carved up, from an expansive single-family home into an eight-unit rental monstrosity.

The locals along Hillside will tell you that after it went vacant, the place became a flophouse for transvestite hookers.  There are two ways to confirm that tidbit of information.  One involves reenacting scenes from "The Crying Game" or "Funky Cold Medina," and the other is achieved by reading the police reports and finding a statistical over-representation of men being arrested there.  I'm guessing the good people of Hillside went with the latter route.

Eventually that was shut down, and the empty home has been slouching towards demolition ever since.  It went into tax forfeiture, was transferred to the city of Minneapolis, and had a date with a bulldozer.  While utilities were being disconnected, a new benefactor approached the city and asked to purchase the house.  That person is...

...Nicole Curtis, the Rehab Addict.  She proposed turning it back into a single-family residence, profiling the rehab on her television show, and the putting the home on the market for a new owner.  Nicole is currently going through the neighborhood and City Council approval process.  Like any transaction, it won't be guaranteed until the ink is dry on the closing documents, but we're hopeful that this will go through.

In the meantime, a friend of mine who can dig up undiscovered historical connections began his research.  Whenever the City of Minneapolis seeks to demolish a house, they have to first attempt to find any historical significance to it.  That search however, often barely scratches the surface of what's out there.  City staffers found very little, but what if the house had a different address when it was built?  Sure enough, the building permit for 1518 Hillside matches up with this property.

The builder of 1518 Hillside Avenue North was an architect who would rise to his own level of prominence in later years - a man by the name of James Leck.  Leck went on to build Manufacturer's Hall at the Minnesota State Fairgrounds, and he and his architecture firm had a significant role in some of the most iconic college football stadium construction of the early twentieth century.  The Leck Company was involved in the Notre Dame stadium, and most importantly, "The Big House" where the University of Michigan Wolverines play.

He also built the old University of Minnesota Memorial Stadium.  Which is okay, I guess.  You know, if you're into vastly inferior football programs.

1522 Hillside is turning into the realization of almost everything I daydream about that does not involve Batman.  They said the house couldn't be saved, and we're saving it.  We were told it would cost a half a million dollars to fix, and the rehab will happen at a portion of that amount.  Housing developers were inside the place and said there was nothing historic left, when really nothing could be farther from the truth.  The city's cursory search for historic relevance missed this home's connection to some of the most iconic collegiate sports architecture, and a north Minneapolis resident picked up on that.

To say this is a vindication of the preservationist stance serves only to diminish what is really happening here.  A house is being saved and a community will benefit.  Everybody wins, which is more than what the Gophers can say about their games against the Michigan Wolverines.
Posted by Jeff Skrenes at 12:54 AM