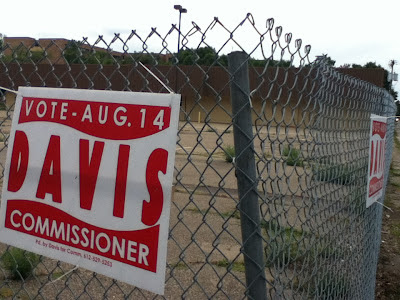 I've only met perennial candidate Leslie Davis a handful of times.  His "Earth Protector" ideas range from possibly interesting to laughable to downright financially disastrous.  But the guy does know how to make a spectacle of himself at public meetings.  He's got chutzpah, and there's no denying that he can be entertaining.

That brazen attitude led to his placement of campaign signs on Hennepin County property.  The former Kowalski's site at 44th and Humboldt, now owned by the county, was sporting some Davis for Commissioner campaign signs.  That takes a special kind of guts.  Running for Hennepin County Commissioner and illegally placing your campaign paraphernalia on county property is a pretty brazen act.

Well others can be brazen too.  Since there was a polling place a half a block away, I took the liberty of removing the signs so that people wouldn't be influenced by them in any way.  On my bike ride home, I saw quite a few more Davis for Commissioner signs on telephone poles where they had no business being.  But I couldn't remove them because there was no trash bin nearby and the signs were too large to carry around on a bicycle.

Leslie Davis, you are a sign spammer.
Posted by Jeff Skrenes at 8:20 PM