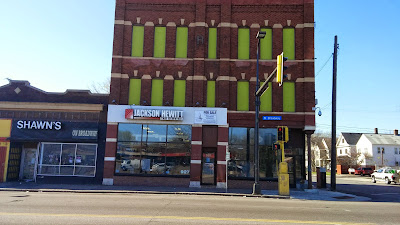 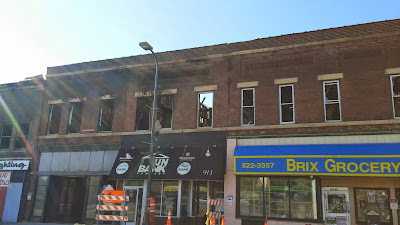 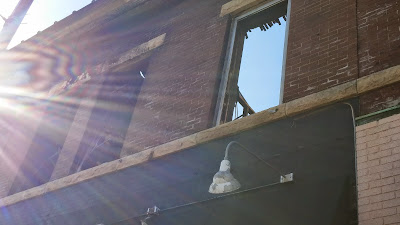 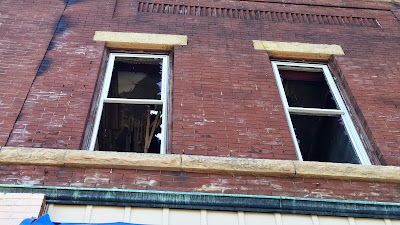 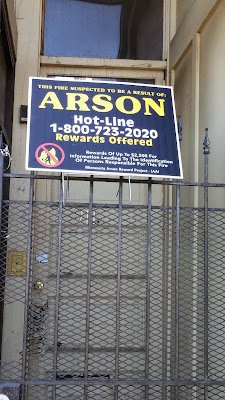 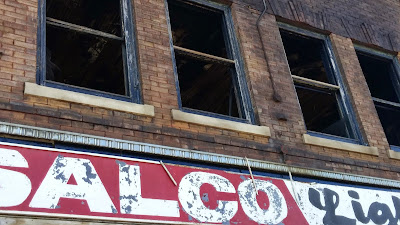 ...propose demolition.  Oh sure, I concede that one or more buildings may in fact be damaged beyond repair from the fire, smoke, or water.  But I'm not a structural engineer nor do I have any specific knowledge abut these buildings or fire damage that would make me qualified to represent a position--other than the position of "I like old buildings, I think community history is important, and I have seen worse damage get fixed."

But yet the print edition of the Star Tribune story lead off with a quote that "It's a demolition job now," and repeated that quote on the interior headline, then finished the article with the same quote. (The online version only has the quote at the end.)  All were taken from one individual statement, from a neighbor who didn't seem to have any expertise on the matter.  Again, I concede that one or more structures may be unsalvageable; and that developing or rebuilding one building instead of the better part of a block is something that may be harder to attract a developer for.  But any statement about the final fate of these buildings without the expertise to back it up is just speculation.

And speaking of speculation, there's more than a little of that going around regarding the nature of this fire.  Let's be honest; the instant the Satori development was proposed (and probably well before that) this land was worth more to some people without the pesky historic buildings on it.  So there are more than a few questions about potential foul play that deserve to be answered as best as possible.

And those answers ought to come before redevelopment--especially if the redevelopment encompasses the whole block.  I would hate to see new construction (or rehab, for that matter) derailed in the middle of a process due to an arson charge or conviction.

Finally, on this point, the owner of Brix Groceries has said he intends to rebuild, and Brix, Olympic Cafe, and other stores in the affected area are again open for business.

So how best to move forward?

I would have first called for an assessment from a neutral party regarding the viability of these buildings.  And neither Tim Baylor nor anyone associated with Satori, nor any other potential developer, should be a part of such an evaluation.  No proposed developer is going to come in to such a project with a neutral position.  If you want to tear down, you'll find a structural engineer who backs up your assertion that the buildings can't be saved.  (And the Satori proposal said they couldn't be saved even before the fire.)  If you want to restore the buildings, your proposal will come up with ways to make that happen.  Thankfully, it seems the city has already taken care of the first order of business in announcing their decision not to demolish at this time.


Next, I'd recommend some sort of "West Broadway Historic District" plan be opened up.  If the wholesale demolition of a few blocks is going to require tax increment financing, as Baylor suggests through the Satori proposal , then shouldn't we also compare a TIF designation for restoration and/or reconstruction of only one or two buildings?  Furthermore, if development is going to require a significant public investment the the public needs to thoroughly vet anyone coming to the city coffers hat in hand.

So for instance, if a developer's only local track record is a condominium project that fell apart midway through the plan, and the epitome of poor urban design anchored by a fast food chain that can't keep crime away, then any proposal associated with that developer should offer pretty compelling reasons why it deserves serious consideration.

Along those lines, this is a chance for the city to finally get serious when it comes to the buildings that the Community Planning and Economic Development arm actually owns along this stretch.  Specifically 927 and 1001 West Broadway, the two buildings on either side of the intersection of Broadway and Dupont.  Here is the latter of those two buildings: 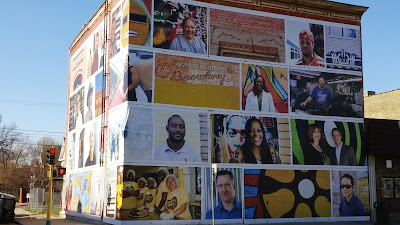 Can anyone tell me what's wrong with this picture?  Most people drive or walk by and are impressed by the cool artwork that encapsulates an entire building.  But from day one, my initial reaction was that the city essentially said, "We have no idea how to fix this building, nor any clue how to market it to someone who can.  So let's put up a mural that shows off some of the other cool things along the corridor, and hope nobody notices."

As long as 1001 Dupont is encased in this canvas, no prospective buyers can fully evaluate the condition of the exterior.  And how much did this cost anyway?  I mean I understand that money isn't always fungible, but this had to have cost tens of thousands of dollars.  What if CPED or a private foundation would have said, "We'll spend $30,000 on tuck pointing in order to incentivize a new owner"?  Instead, it's been years since we covered the building in pretty pictures and the development fairy still hasn't left a shiny quarter under our pillow.

Now more than ever, West Broadway revitalization needs a viable path to success.
Posted by Jeff Skrenes at 4:23 PM