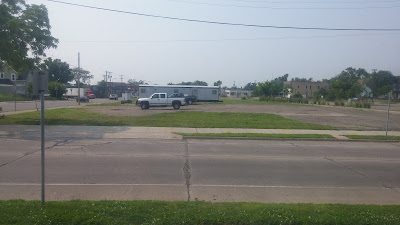 ...First, a word about equity.

Here we have a citywide change that could have profound effects on the northside, and in multiple communities of color.  There was one public meeting held on May 21st at the Mill City Museum. Now, what can you tell me about parking near the Mill City Museum?  That's right, it ain't free.  So if you were to set up a meeting about changes to parking requirements, and you chose a location entirely devoid of free parking options, how many poor people who use a car as their primary mode of transportation would you expect to show up?  Better yet, the city can produce the sign-in sheet from the event and we can contact attendees to see if anyone fits that description.

Were neighborhood organizations in places like north Minneapolis given proper notice?  Was any meaningful outreach done through media operated and used by communities of color?  What kind of outreach was done in the African American, Hmong, Latino, Native, and other immigrant communities?  Frankly, it's time that the city take this equity thing seriously.  If sweeping, citywide proposals like this haven't seen the light of day in communities like mine, then they aren't ready to be adopted.  End of story.  And don't even start with how doing that is harder, more expensive, or longer.  The long-term costs of getting it wrong and inadvertently contributing to systemic racism are far greater, and it's high time the city realize this.

In the body of every city staff report like this one, city staffers have to cite whether the proposed amendment complies with, among other things, the Minneapolis Comprehensive Plan.  There ought to be a similar requirement for the same level of detail in regards to engaging our citizens, especially those whose voices are routinely overlooked.

The last thing I'll say on this topic for now:  The public comments included in the staff report were overwhelmingly supportive.  Forty-five in favor, six against, and one that I discounted.

(This one was a satirical piece written by a group that mocks its opponents.  I discounted it not because of its satire or mocking tone, but because it was signed by a coalition that identified itself only by an abbreviation and no author or list of signatories was provided.  Therefore the piece cannot be attributed to any one person or any group of people separate from those who already had their voice heard.)

Out of the forty-five in favor, thirty-two were a form letter copied and pasted.  At least twenty-five of those form letters were from south and southwest Minneapolis, and most of those were from richer and whiter neighborhoods.  The staff report comes with a handy map showing what areas would potentially be impacted--the change, after all, applies only to areas zoned for three or more units and within close proximity to transit.  If you took this same map and overlaid it with dots for the location of each commenter, you'll begin to see that many of those commenting do not live in impacted areas.  Their opinion does deserve to be heard, but again, if the proposal hasn't been vetted by people who will feel its impact firsthand then on principle it's not ready for approval.

Equity and outreach aside, let's get into the meat and potatoes of what's being proposed.  For any structure or project zoned R3 and above--that's a triplex or higher--AND within 350 feet of certain kinds of transit amenities, parking requirements would be completely eliminated.  Before we go any farther, let's be clear:  Although the change is citywide (minus the University of Minnesota areas, which have their own parking issues) it does not apply to single-family homes or duplexes, nor does it apply to multi-family housing far from high-frequency transit.  However, proponents make it clear that their end goal is to include every single parcel in the city in this change.

Even though, for now, the proportion of land affected is relatively low, it would mischaracterize the change to say it applies to "very little" or "almost none" of north Minneapolis as its supporters claim.  The ordinance would apply to residential zoning of three or more units and housing on parcels that allow for certain kinds of commercial use, provided they are within a certain distance of high-frequency transit.  Well when you look at what land in north Minneapolis is zoned in a way that would be affected by the change, and when you add the next layer of where there is currently enough vacant land to create multifamily housing, you will see a very different picture.

This change impacts a negligble amount of the  total geographic area of north Minneapolis, but it affects almost all of our most viable development opportunities in the near future.  The potential impact here is HUGE.

And let's talk about those high-frequency bus routes.  As a sole factor in contributing to the ordinance, that metric doesn't do north Minneapolis justice.  The question that should come up for anyone who has used public transit on the northside is, "Where do those buses GO?"  We are a food desert.  We currently have one large grocery store (and more than a few unheralded ethnic grocers, it should be said).  It's rather easy to live in this community, be only a mile from the Cub Foods, and need to take two buses to get there.  Scratch that.  It isn't easy, and as a result we have a disproportionate number of northsiders who use taxi services for such basics.

Don't even get me started on how isolated we are from other parts of the city by our bus routes.  The dearth of direct routes from north to other destination points could be a series of blog posts in and of itself.

North Minneapolis doesn't have the same bike amenities as the rest of the city.  We are not a dense, walkable community (yet) that allows residents to meet daily needs on foot, bike, or transit.  Until those inequities are addressed, the wholesale removal of parking requirements does a disservice to those who would live in such housing.

If this passes, what does north Minneapolis get in return?  More green space for parks and community gardens as part of new development projects?  Rooftop patios?  Balconies?  Bicycle storage requirements in lieu of parking stalls?  No, no, no, and no.  At the neighborhood level, we often have to push developers for some of these basic amenities.  We are not always successful.  Giving this carrot, with no proverbial stick to offset its impact, could encourage developers in a race to the bottom.

In spite of all these reasons, I remain supportive of the goal to reduce dependency on automobiles and to create communities that function well while minimizing the need for parking.  That's why I favor Council President Johnson's idea of an amendment exempting north Minneapolis from the new rules, but that amendment alone is insufficient.  If I could wave a magic wand here, I would set benchmarks for walkability and equity around transit and other amenities for north Minneapolis.  When we hit those goals, then we can justifiably say that the northside is ready to relax such rules.

At this time, there has not been sufficient community input and the real-world impact of the proposal doesn't provide a net benefit to the northside.  The ordinance needs to be put on hold or exempt north Minneapolis until those bars are met.
Posted by Jeff Skrenes at 12:48 PM