We Can Do Better Than 100 New Rental Properties 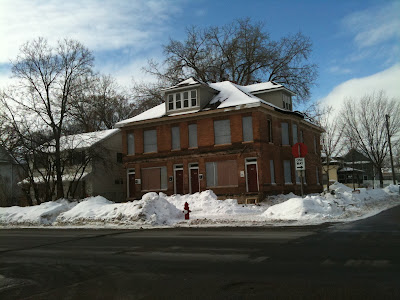 Post by the Hawthorne Hawkman, stock photo originally from the Irving Inquisition blog.

Before delving into why that is, I should first disclose that today is my last day as Housing Director of the Hawthorne Neighborhood Council.  And I believe the private market, not non-profits, is poised to take the lead on revitalizing our community--if we let it.

While private rehabbers and new owners are chipping away at the shell they've been in, here comes a new program that could keep that from happening.  Urban Homeworks and PPL are working to buy up 100 north Minneapolis houses and convert them to rentals, albeit temporarily.  The plan after two years will be to sell them back to owner-occupants, and use the interim period to do credit repair and other work with their clients.  This is an initiative I fully and wholeheartedly support.  Except for the part about rental properties.  And there being 100 of them.  And the involvement of Urban Homeworks and PPL.  Other than that, it's great.

Now if this seems like I oppose the project in its entirety, I assure you that's not the case.  Allow me to explain...

...As I've been transitioning back into the private sector, I've been talking more and more with Realtors, bankers, benevolent flippers, and potential buyers.  One of the common refrains I have been hearing is this:  Inventory is drying up.  Especially boarded/vacant inventory.  For communities dealing with such blight, that's terrific news.  For the people who make a living buying, fixing, and reselling homes, and who do it well, this means that they will soon come looking for the last remaining such inventory in the Twin Cities metro.  And those houses are right here in our proverbial backyard.

It would be one thing if those buyers had to compete with non-profits at all, but potential homeowners will be pitted against entities that will add to their rental portfolio, even if only temporarily.  If that starts to happen--and I predict it will--then PPL and Urban Homeworks could actually be preventing private investment and owner-occupant home ownership, two things north Minneapolis sorely lacks.

I know many of the good people who work at these places, and I know they'll say that they don't want to get in the way of good private investment.  I've even seen examples when, to their credit, they've stepped aside to let such investment happen.  So they'll say they only want the properties that nobody else does.  That's terrific, except when trying to define a property that nobody else wants.  The anti-demolition push, fueled in no small part by Nicole Curtis, has the City of Minneapolis re-examining exactly that question because it's becoming crystal clear that plenty of good people do want to buy and fix distressed homes in our community.

So the definition of a house that nobody but the non-profits want is shifting even as you read this.  What that really means in our emerging paradigm is that it's a house that nobody else was aware of or able to want.  There certainly will be houses that the private market rejects, and those are ones that I would love to see fall under the purview of this program.  But how do we determine which houses those are?

Well in order to do that, we're going to go to the corner of my mind where I am Emperor of Everything.  I wave my scepter in dramatic fashion and everything I wish becomes so merely by my decree.  It's one of my favorite places to visit, and everyone I bring there winds up agreeing with me eventually.  That's either because my ideas are so great, or because of Stockholm syndrome.  Either way, it all works out in the end.

There are several ways UHW and PPL could acquire houses:

1.  Through their connections.  Maybe somebody at Urban Homeworks knows a guy who knows a guy whose cousin is in foreclosure and needs someone to buy his home.  There's no way to realistically limit people working their personal connections, so if properties become one of the 100 rentals this way, I can't get too worked up over it.  And any initiative that tries too hard to control every aspect of a fluid marketplace will fail eventually.  Live and let live in this case.

2.  Through the MLS.  No.  Or at least not right away.  This is the purchase option that gives me the most pause.  Non-profits may have the ability to purchase for rental during the First Look period, whereas a private developer could not purchase for rehab and resale to an owner-occupant.  Even beyond the first fifteen days, if a seller has an offer from a private party that's contingent on financing vs. an offer from a non-profit that's contingent on the ink drying on a check, which do you think will be accepted?  Now I do think they should buy homes for this project via the MLS, but only after those houses have been sitting a while without interest from the private market.

3.  Through local government or the Twin Cities Community Land Bank.  These purchase options may have the most potential for both private and non-profit parties.  The main appeal here is that once the City, County, or Land Bank owns a property, they can refuse offers from known slumlords or buyers who don't pass muster.  This is where I would want to direct most UHW/PPL rental purchases.  And I would set things up in tiers.

First priority would go to owner-occupants.  Next in line are the private developers.  Only after properties have been adequately marketed to those groups, only then would the non-profits get to pick what's left.  In this case, I'd try and find ways to get more of the marginal MLS properties into the Land Bank, in order to limit the impact a slumlord could have in competing for those purchases.

Under that tiered system, the non-profits might complain that they'll get hardly any properties.  That's the point.  If these houses are desirable on the private market, that should be encouraged in our community.  The other gripe one could expect is that the remaining houses are so distressed that instead of 100 houses, this initiative can only afford to fund half the number of acquisitions.  Again, that's kind of the point.  The fifty houses that would go to the private market didn't need non-profit intervention anyway.

Urban Homeworks and PPL do a fine job managing their rental portfolio, and the addition of more responsibly-managed rentals in north certainly has appeal.  With rental vacancy rates at extreme lows, the need for affordable rental housing is as strong as it's ever been.  But even proponents will admit that the rental strategy is only temporary while the housing market recovers.  The market, however, is positioned to potentially make such a temporary use unnecessary.
Posted by Jeff Skrenes at 12:56 AM