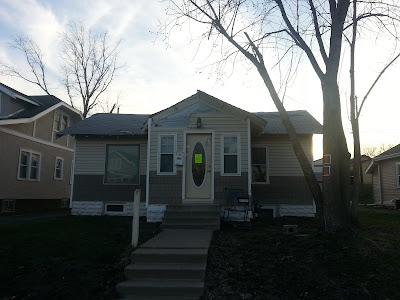 There are times when I'm asked how it is that I seem to have a different reason for keeping a house from demolition each time the prospect comes up.  Well, it's because there are so many more reasons to save a house than there are reasons to tear it down.  A case in point is 3019 Knox Avenue North, pictured above.

The city is considering acquisition for the purpose of demolition and holding the land.  Because how can there be a housing crisis if there aren't any houses?  I don't know, maybe that's their logic.  In any case, this house clearly is in need of repair.  But doing so, even using the city's own numbers, creates housing that's far more affordable than new construction--although building new isn't even on the horizon at this point.

So we don't know how much the city would pay the existing owner.  The property could be a donation, or they could be spending close to their unofficial limit of about thirty grand in acquisition costs.  Let's be generous and say they're getting it for the princely sum of $1.47.  There are $705 in unpaid special assessments that would presumably be waived, and a minimum of $8,356 in back taxes.  ($624 annually and what looks to be a VBR fee).  Then the city will spend another $5,000 - $15,000 to tear this house down.  Let's call it an even ten since we lowballed the acquisition cost.  And with no developers knocking at the door (When is a door not a door?  When it's demolished.) the land will sit vacant for some time.  Let's say five years, although ten to fifteen could be more realistic.  That's an additional $3,120 in lost tax revenue.

Oh, and this block already has four vacant lots on it.  I just thought I should mention that.

Here's how the demolition costs play out:

But here's the kicker:  usually the city's staff reports are almost laughable in their estimates for what it would take to bring a property back up to code.  For this house, the city inspector states, "Estimated cost to meet minimum code - $15,000 - $50,000."

Getting $50,000 and breaking even on a resale could be a stretch for such a tiny house, making this rehab work ideal for a non-profit to pick up.  Even if the post-rehab sale price was only in the thirty thousand dollar range, that $20,000 in lost revenue was spent on preserving a house and giving someone a home now.

But the premise of this post is how preservation in this case provides opportunities for truly affordable housing.  Based on a $50,000 purchase price, a prospective owner's costs are as follows:

I did not factor in closing costs and prepaids, on the basis that those vary from one lender to another, that down payment assistance programs like the Jordan Advantage (administered by Neighborhood Housing Services of Minneapolis) could cover this, or the seller could help with those costs.  I also did not factor in mortgage insurance because there are programs out there that do not require it.

So someone making under fifteen grand a year could qualify for this house, and rather comfortably.  Where else is that kind of opportunity available?

Contrast those numbers with what PPL has sold their new construction homes in the EcoVillage for:  a $155,000 sale price.  (Those houses, for the record, came with costs well above that sale price.  Which is fine, because the neighborhood benefits from that quality construction.)

The inspection report does state that the floor plan at 3019 Logan is "obsolete," but that assessment could be made of almost any house built in the 1920's.  And there are plenty of people who would put up with an inconvenient floor plan if it meant owning their own home with their own yard for under $350 a month.  This house may have only one bedroom, and certainly no more than two.  Again, there are plenty of people (singles, couples with no kids, empty-nesters) who are quite content with that little space.  That's why small houses exist.

By the city's own calculations, 3019 Logan Avenue North could be brought up to code for $50,000.  Rehab and resale costs that low could provide an affordable housing opportunity for someone who might think he or she would never be able to own their own home.  Instead, the city's recommendation is for demolition and holding the land for "energy efficient new construction."
Posted by Jeff Skrenes at 11:53 PM